It’s just a knife. Nothing fancy or unique, just a sturdy, locking blade knife with a big handle and blade. It isn’t
even a “Made in U.S.A.” variety. It can be opened and closed with a heavy glove on. It fits poorly in any pocket
smaller than a coat or vest and is heavy to carry.But, the thing is, this knife is really special. This knife was held and used repeatedly by my Dad’s hands. 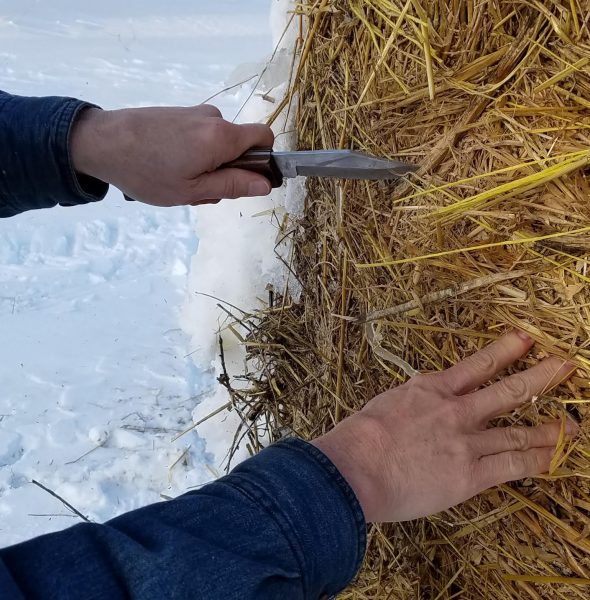 He started using this knife when hay went from little square bales to big round bales. Feeding those big round bales with a tractor was quite a change in my folk’s ranching life. For decades, all the hay was put up on Jug, Owl and Hammontree Creeks with a little square baler. My Dad hated having to handle the hay more than critically necessary so he had an accumulator and stacker head that made haying season somewhat more tolerable and speeded up the removal of the hay crop from the flood prone meadows on the ranch.

My Dad and brothers were adept at handling that hay with the stacker head and barn sized stacks were neatly
placed in stackyards and adjacent to the corrals for the winter feeding. When winter came, cattle and sheep got fed those little square bales of beautiful western wheat grass hay. Each bale that was opened smelled like a summer day as it was fed off the back of the pickup. Mom would often drive the pickup for Dad when it was time to feed. He’d get it loaded and then pull up to thestep to pick her up and they’d go feed. I’m sure many ranch business decisions were made when they were looking at the stock together.
As us kids came along, we got to “drive” the pickup to feed when we could see over the dash even a little bit. I
remember Dad would put the pickup in low range, first gear, and turn me loose. He’d climb onto the back of the pickup to feed the hay. His razor sharp pocket knife cut the twines and the hay was strung out for the stock. He’d tap on the roof when he was done and that meant to stop. When I was too little to reach the clutch, I turned the key off. I imagine some of those stops were a little abrupt.
But, time went on, Dad got older, kids left home to make lives of their own, and those little square bales were
becoming more work than one man could do. So, he would cut and windrow the hay and contracted with a local family to bale it for him. He never owned a round baler himself. He said he’d rather someone else fought with those newfangled things and he could just pay them to do so.
It was a good system and he then had his big stacks of round bales to feed every winter. It was easier on him
physically of course, but awfully hard on his Scots nature in that the round bales caused the cattle or sheep to waste precious hay. He had to live with that fact though and acknowledged that feeding those big rounds made the feeding go much faster and was sure easier on his aging body and bad back.
Of course round bales have twine, a lot of twine. So, rather than have to fumble with his pocket knife, he
procured the big knife. It lived, year around, in the tractor except for short forays into the house to get sharpened. It was a dependable, forgettable tool in the arsenal of ranching. If it got dropped, it was easy to find in the snow, and it could really saw through the ice and snow and get through those twines with stiff, aging hands.
When my folks sold the ranch and retired, Dad gave me that big twine cutting knife. I used it for years to cut
twines at the barn. It served me very well, as it had him. When I left that place and moved here, it came with me, a treasured tool in my new life. I use it to cut twines on the round bales. It resides in my vest pocket where I can reach in with my winter glove on, then open it without removing my gloves, and cut the twines. I was cutting twines last week, on a bitter cold day, and realized what a handy old friend that knife is. It’s reliable and with just a little touching up on the stone occasionally, does the job it’s meant for every time I ask it.
It still isn’t anything special to look at. It’s grips are scratched from years of use. But there’s just something so
special about it to me. It was a gift, from Dad to me, that just keeps on giving. It will probably keep on doing it’s job when it’s passed to my son. I hope, when it is, that it’s special to him too. It’s value is intrinsic and when I hold it in my hand it might even have some of the warmth of my Dad’s hands still radiating from it.