When I moved to northeastern New Mexico to a ranch job, I thought I was in a veritable winter paradise. It might get down to the upper 30s at night, but the days were sunny and usually up around 50 degrees. I’d never wintered anywhere but northwestern South Dakota, and left there to head south in December when it was well below zero with snow on the ground.
The crisp winter days were generally really pleasant. It seemed that all of the meadowlarks and bluebirds from further north wintered there, so it was a feast for the eyes and ears of a northern cowboy. Just imagine a cacophony of meadowlark songs on a January day. Most days I wore my shotgun chaps, a thermal shirt with a flannel shirt over it, sometimes a vest, and usually, early in the morning, an old Army jacket. On my head was my felt hat, occasionally with my earmuffs on on windy days. A scarf around my neck and sometimes a pair of plain leather gloves on my hands completed my winter garb.It sure felt good to me to not have 20 pounds of bulky winter clothes on stepping on a goosey colt in the morning.
I’d been there a couple of months when a new cowboy was added to the crew. He was from the Texas brush country south of San Antonio. He was a good hand, pleasant to work with and was good to his horses. The open country of the ranch was a new experience for him. He’d never cowboyed where you could see very far and didn’t have to fight the brush most of the time. Tracy and I were riding along one nice day, heading to the backside of the East Bar T to start pushing the yearling steers back toward the north. Tracy looked like a Carhartt commercial. He had on coveralls under his batwing chaps, a heavy coat, had his hat pulled down with his neck scarf tied over it to cover his ears, and heavy gloves. It was about 50 degrees and breezy, but the sun was sure out and working. I had on my usual garb but had already tied my coat on the back of my saddle. 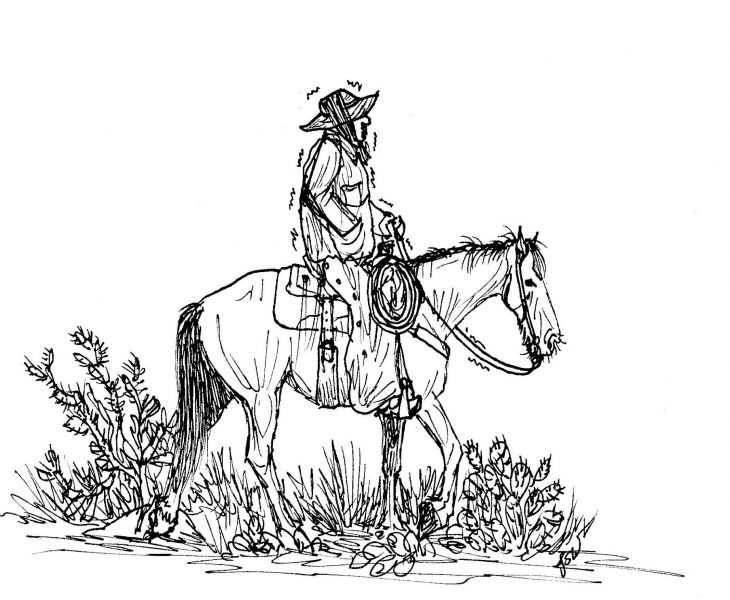 As we trotted along, Tracy kept looking over at me. Finally he asked “Aren’t you cold?” I answered that I was not. We went a little further and he wondered why I wasn’t wearing my coat. I told him I didn’t need it. His concern for my personal comfort was touching, but I felt like it was quite unnecessary. Finally, I asked him if he was cold. He said “I sure am. I don’t think I’ve ever been so cold.” I looked closer at him. He appeared to be shivering a bit as he rode along, plus his nose and cheeks were bright pink like it was 10 below. The poor guy was really suffering. I offered him my coat but he felt like I’d better keep it for when I got cold. When we split up to ride out the pasture he was all humped up like he might just winter kill before the day was out.
As odd as it seemed to me, I realized that we were just from the absolute opposite ends of the cowboy spectrum, weatherwise. When considering that the brasada would get to 100 degrees with humidity in the 90s, with no breeze in the brush he came from, I knew that I would positively die in his home country in the summertime. When looked at from that perspective, I felt sorry for him. It really was cold to him. When March came along with its incessant wind, he just couldn’t take it anymore. He loaded up his 40 years gatherings and went back to south Texas. The wind didn’t bother me, as New Mexico didn’t have any corner on the wind market. It was tiresome, just like at home.
It’s all in one’s personal perspective and experience, I guess. I can put on enough winter gear to ride in below zero weather. I don’t like it, but I can. He couldn’t, any more than I could stand the heat and humidity of south Texas. Everyone’s got their comfort zone. Cold is definitely in the eye of the beholder.