Close Encounter of the Slithery Kind

The horse I’d caught was a broke mare, but she was kind of a flake at times. Cricket had, in the past, boogered at something as I was leading her and dragged me around, or, ran flat over the top of me. She wasn’t wild or spooky, really, just had her moments of having the blank spot get stuck in her brain. So, I generally kept a close eye on her, never assuming we’d have a problem free encounter.

After catching her, I had to lead her into the barn through a really big, solid board door. It had a drop bar for a latch. Just inside the big door was a narrow, slatted, board gate into a box stall. When shut, it made a corner where one had to stand to pull on the big door to drop the bar.

It was a bright summer day outside, so when I lead her into the barn, it was really dark. I held the big door open while she came in past me and turned, thus far not making a single wrong move. I pulled the big door closed and dropped the bar. Just as I turned, I saw something move in the dark corner next to it. There, not eight inches from my face, was a huge snake. He was looking right at me from his perch on the slatted gate.

I’m leery of snakes foremost because I was raised in rattlesnake country. I’m tolerant of snakes that aren’t rattlers, but they do startle me. My first thought was NOT that the snake was a bull snake. I shied, and whirling, I ran flat into poor Cricket and stampeded across the pen with her backing away from me as fast as she could go.

I finally got myself reined up and looked back at the snake. It was a gigantic bullsnake. It was threaded up through the slats on the gate and was still looking at where I had been just moments before, and running it’s tongue in and out of it’s mouth. It looked 12 feet long but was probably about five feet in reality.

That snake was actually a regular in the barn and was a great mouser and kept the sparrow population in check along the roof, where I’d seen it several times. So, I had known it lived there, but, sure hadn’t expected it to be slithering up through that gate just as I came through the barn door into semi-darkness.

My heart hadn’t exploded, thankfully, and though mine started slowing down to normal, Cricket’s did not! She stood off at the end of the halter rope, feet splayed, looking at me with trepidation, eyes wide with white rings around them, nostrils flared, snorting and shaking. I don’t think she’d seen the snake at all, but had been sure I was attacking her, maybe to eat her. It took me a minute to finally get up to her where I could pet her neck and get her calmed down.

It took a long time, maybe years, for her to not be suspicious of me, not knowing when I might just snap and attack her. I tried to point out to her how many times she’d run over me or jerked my arm off while leading her. But, it didn’t do any good. She lived into her 20s but always watched me like a hawk thereafter.

Meanwhile, the bullsnake had crawled on up to the roof line and was calmly making it’s way toward the first sparrow nest. I don’t think we’d scared it at all. 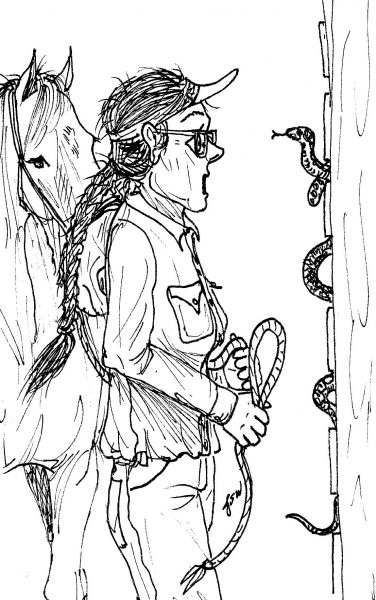