My dear friends invited me to tag along with them to Cheyenne Frontier Days 2016 on Tuesday, July 26, the fourth performance. We attended the highly-awarded outdoor rodeo, where we were blissfully cooled by rain drizzles, watched and played in the carnival, and of course, shopped the huge variety of vendors who traveled in from all over the country. The Daddy of ‘Em All pulls all sorts of people from all walks of life and is quite entertaining. If you can’t make it there yourself, maybe these photos will give you a feel for what it’s like! 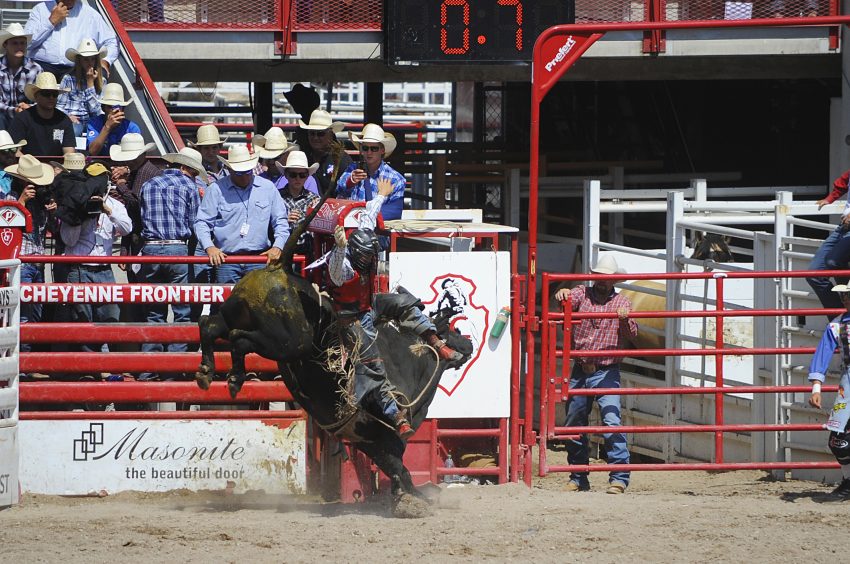 Despite his best efforts, Bobby Welsh, of Gillette, Wyoming, lasted less than one second aboard a bull called 1 SH. 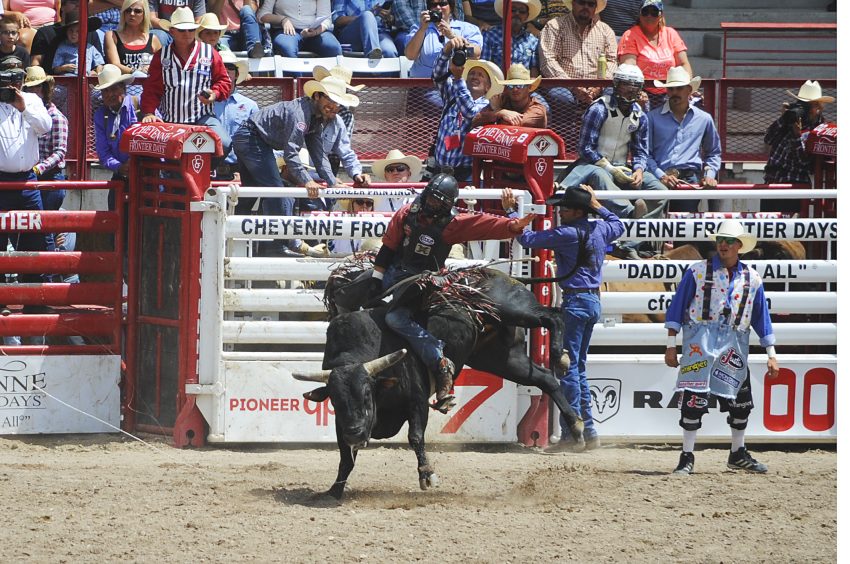 Rorey Maier, of Timber Lake, South Dakota, fails to best Almost Sober, the black bull he drew, and received no score in either round. 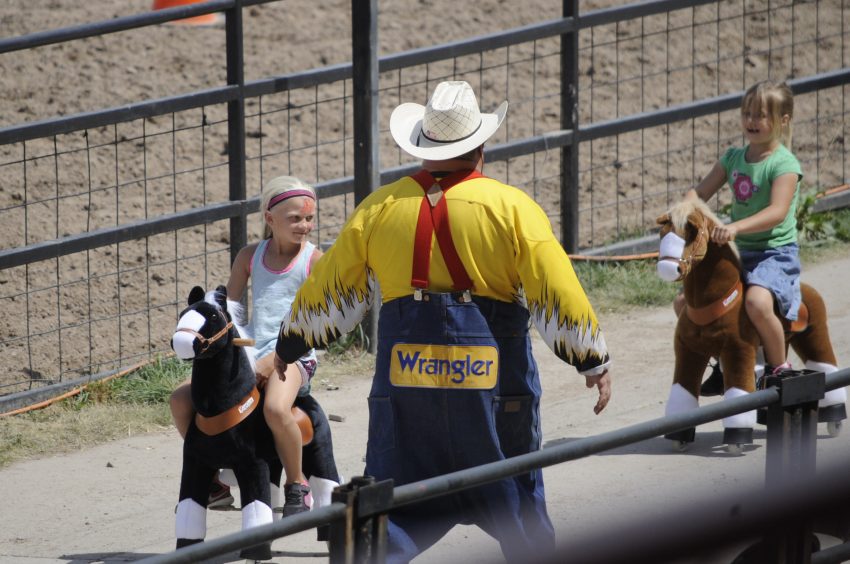 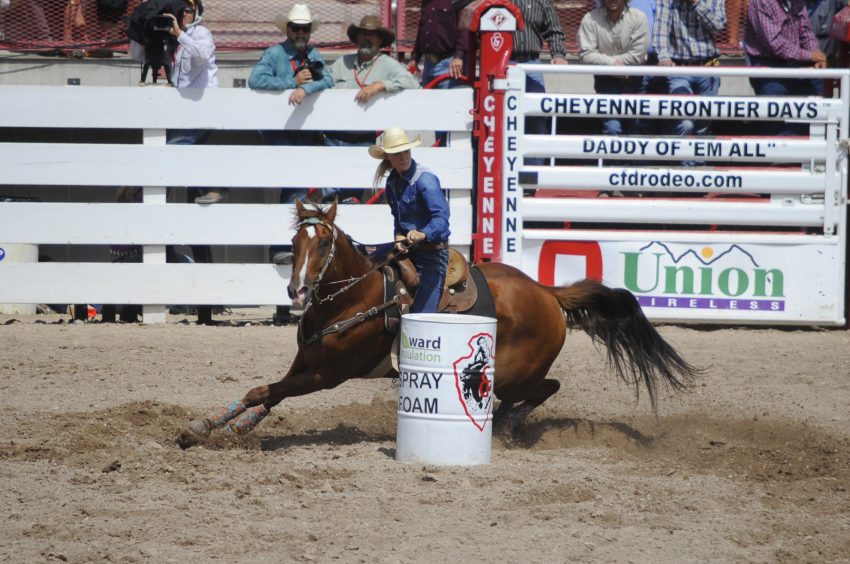 Knocking a barrel in the first turn, Britta Thiel, of Belle Fourche, South Dakota, keeps up her second barrel and looks to the third. She put up a time of 23.74 seconds with the five-second penalty. 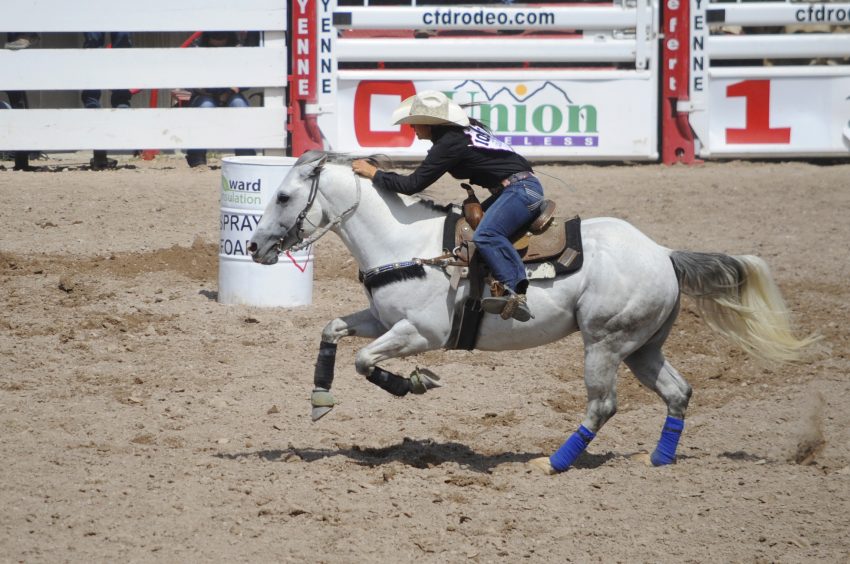 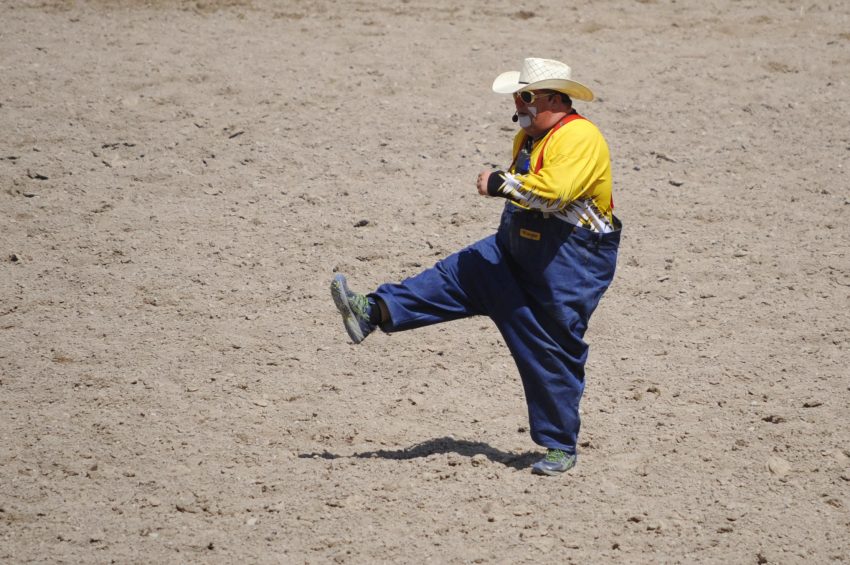 Rodeo Clown Cody Sosebee keeps the audience engaged and entertained during quiet moments within the rodeo. 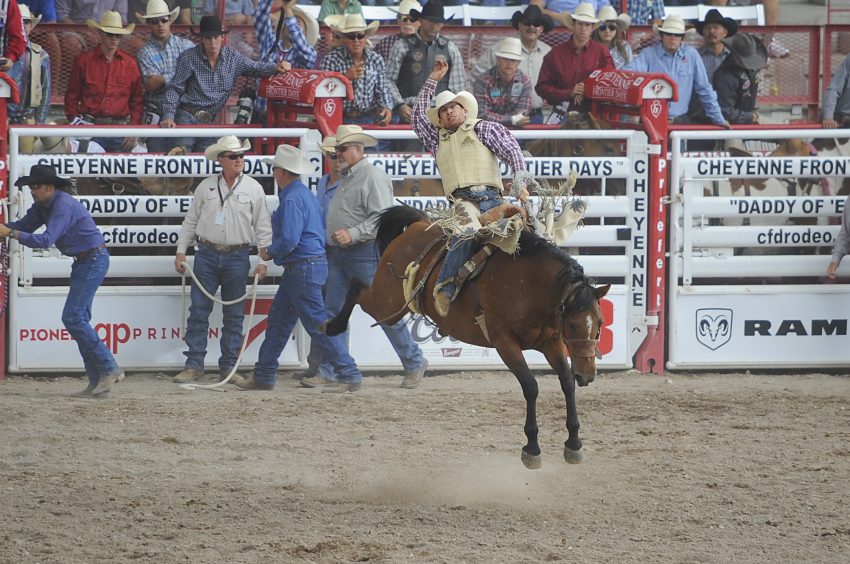 Ridiculousness, the bay bronc beneath Dusty Hausauer, of Dickinson, North Dakota, does his best to unseat him. The pair stuck together for the required eight seconds and scored 71 points. 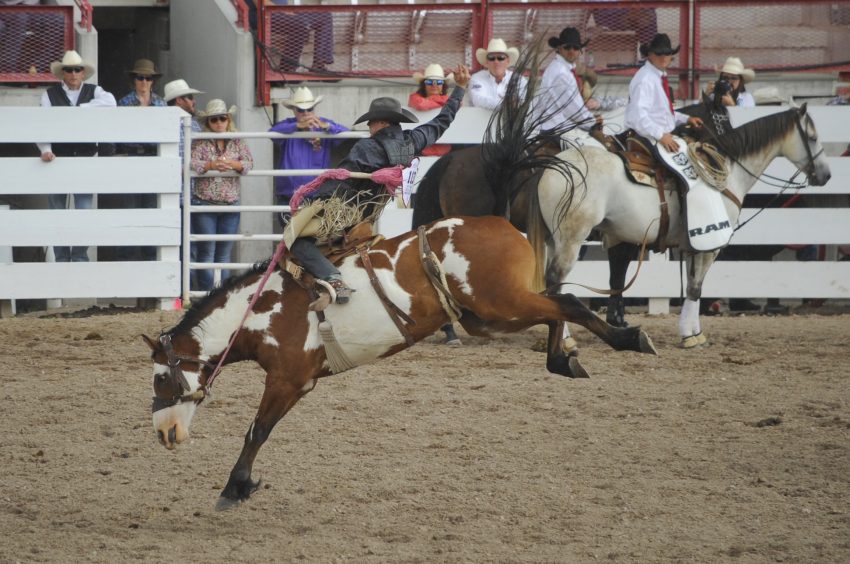 With a hand on his pink rein and the other in the sky, Chase Brooks, of Deer Lodge, Montana, does his best to put up a good score aboard bay paint saddle bronc Big Wig. 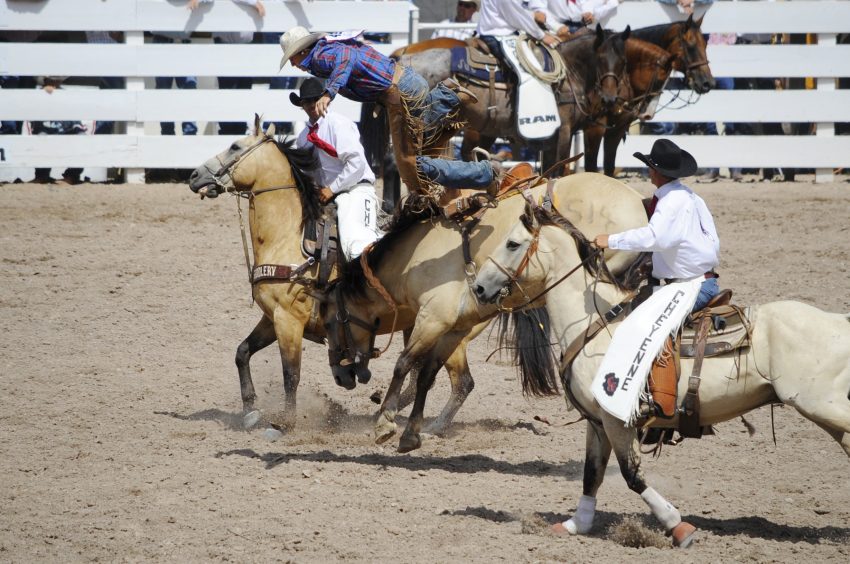 CFD Pickup Men swoop in to help, but Dawson Jandreau, of Kennebec, South Dakota, still gets dislodged from his re-ride saddle bronc but not before he puts up and 84-point ride. 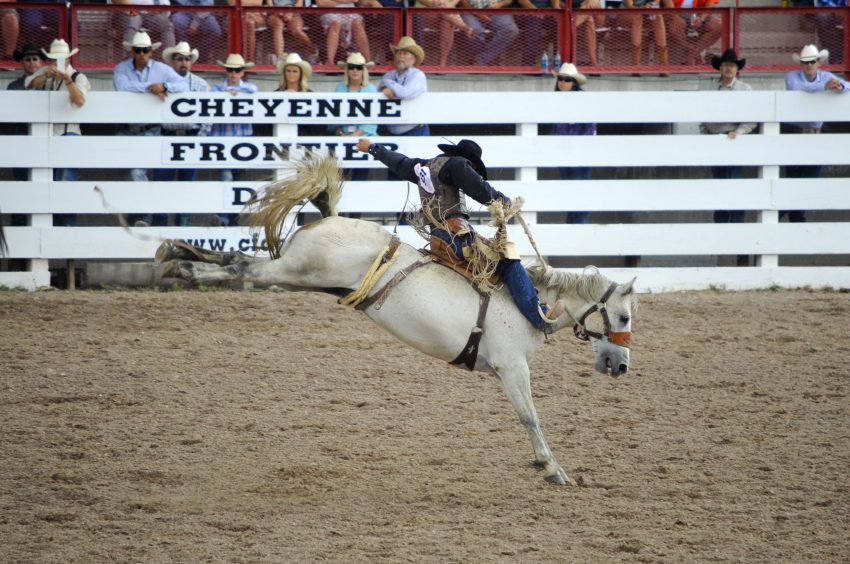 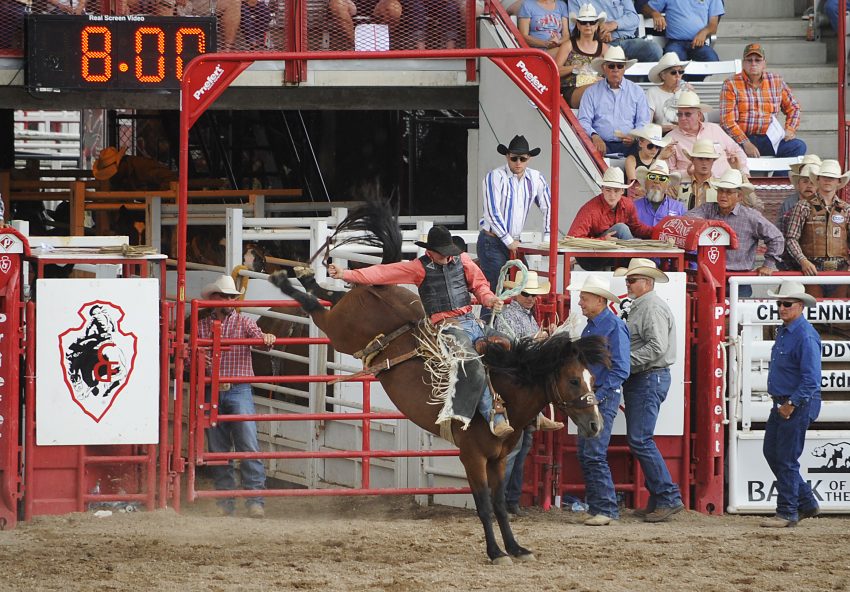 Colton Miller, of Lance Creek, Wyoming, fights to stay in the saddle until the buzzer while the bronc, City Lights, fights to dislodge him. 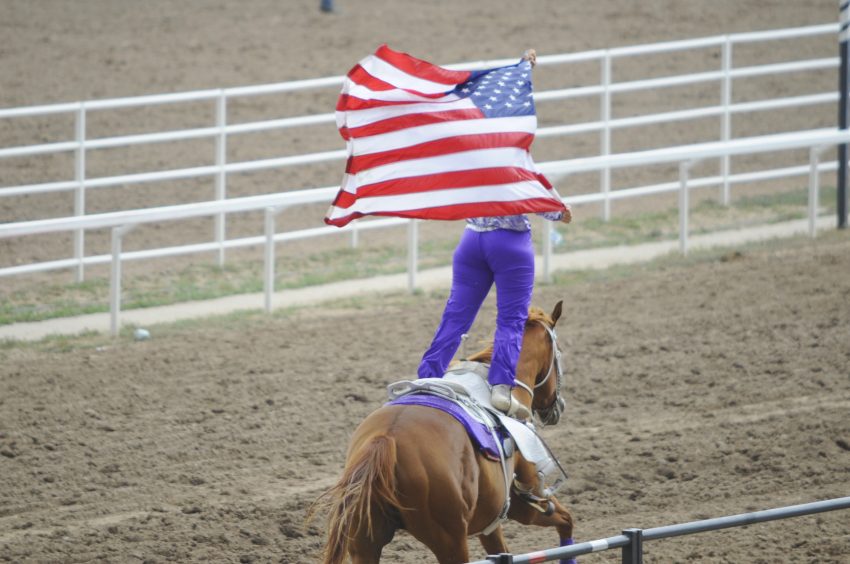 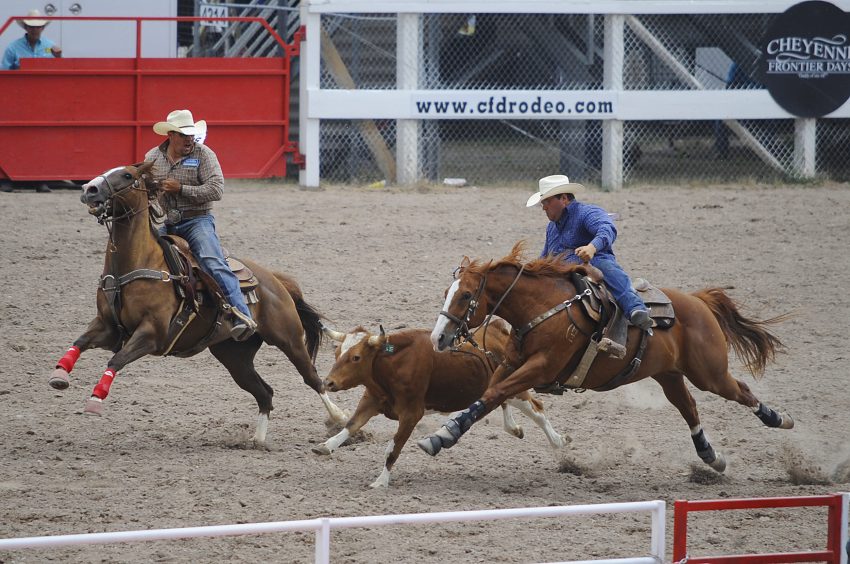 Kody Woodward, of Dupree, South Dakota, reaches for his steer, but failed to wrestle it down, resulting in a no-time. Woodward wrestled in a time of 12.9 in the first go. 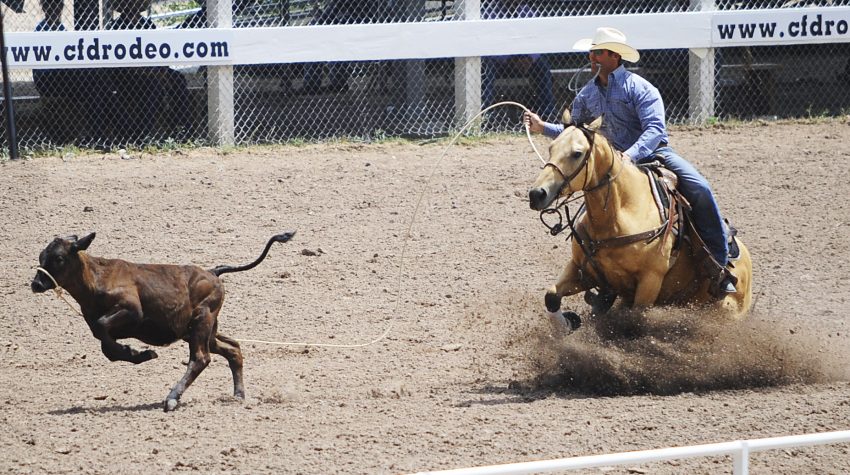 Missed him by a nose, Clint Kindred, of Oral, South Dakota, catches his calf by only the nose and is out of the money. 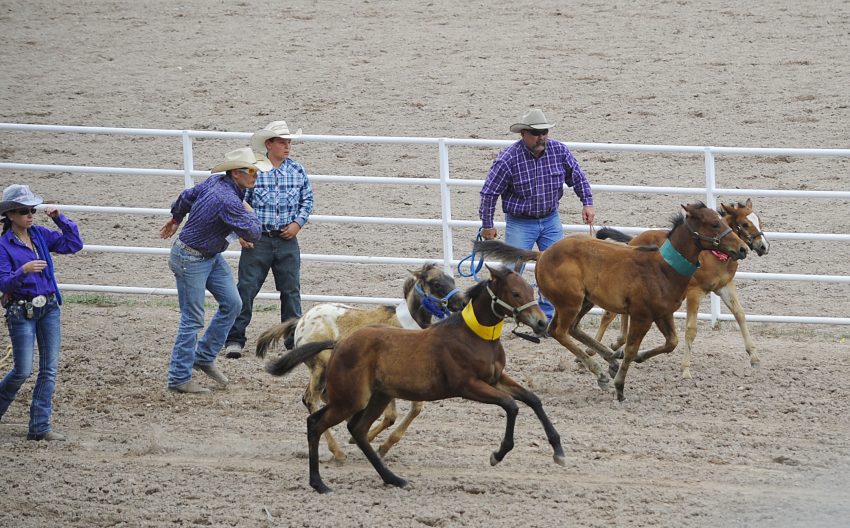 Upon being released, not-yet-weaned colts dash to their waiting dams, posed at the other end of the track. 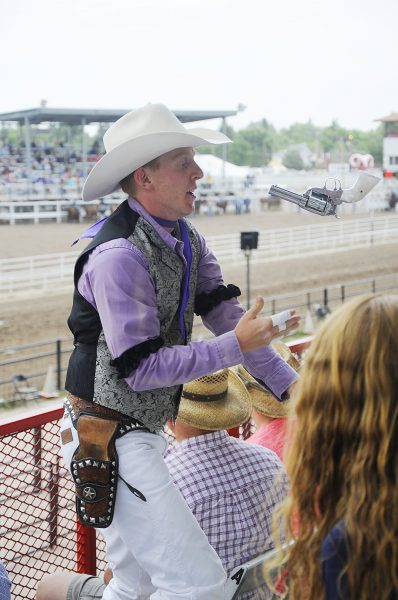 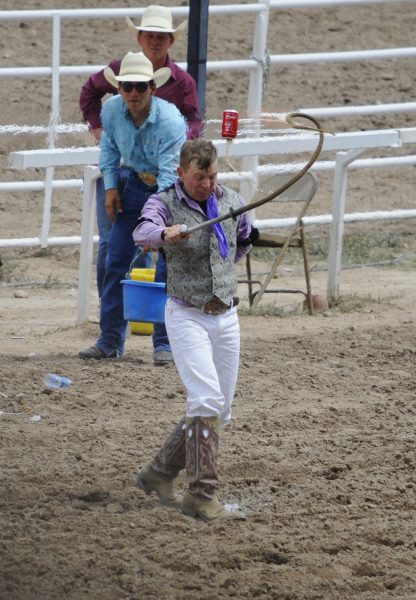 Trick-riding, gun-spinning, whip-cracking extraordinare, Rider Kiesner whips a can of Coca-Cola, a CFD sponsor, off his head with a bullwhip lit on fire. 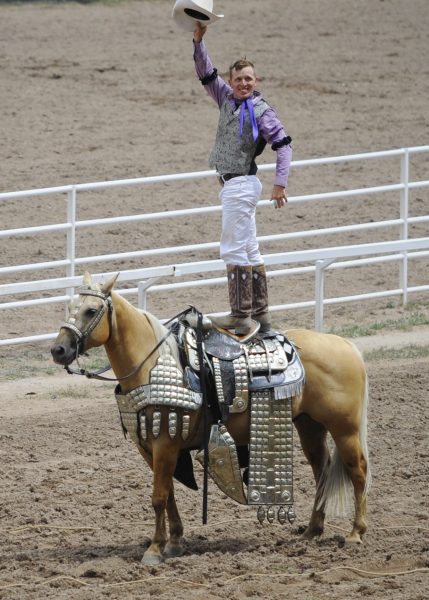 Trick-riding, gun-spinning, whip-cracking extraordinare, Rider Kiesner wraps up his act standing on his horse and waving his hat at the audience. 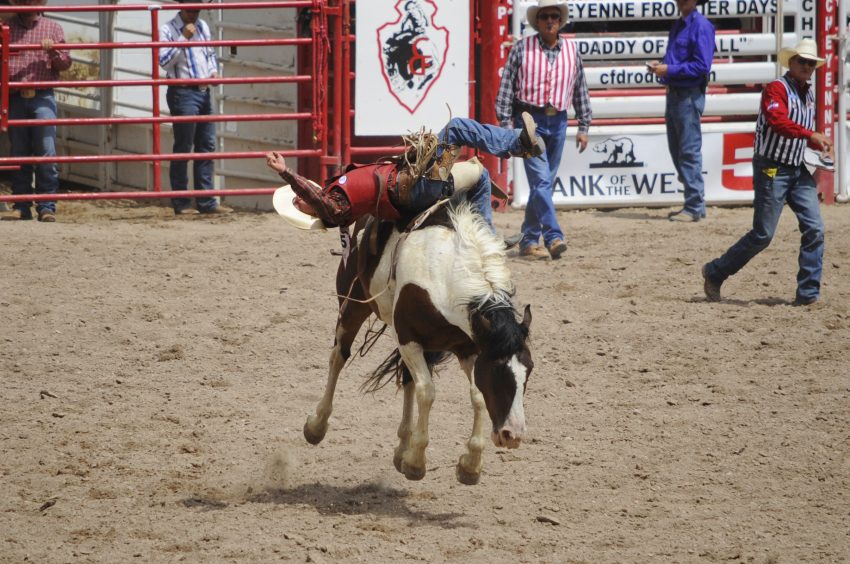 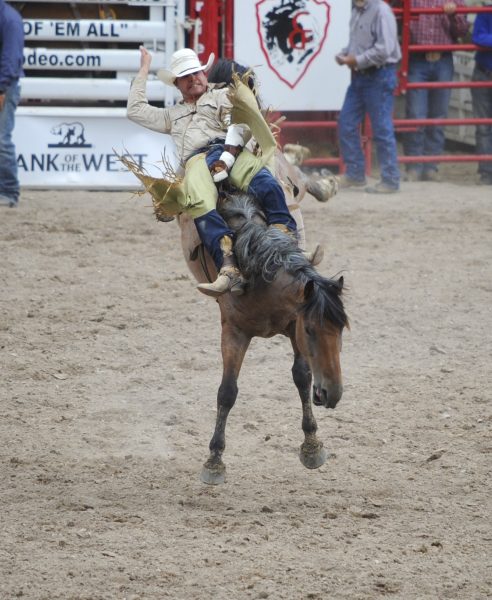 Leaving nothing on the table, Weston Garrett, of Gillette, Wyoming, takes re-ride option to score 68 points. 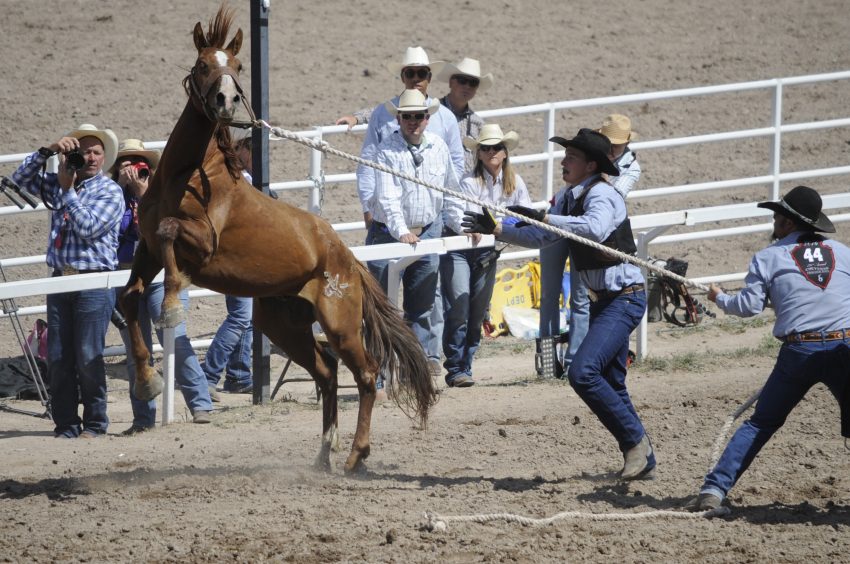 The shanker tries to keep ahold of a rearing horse while the mugger moves in to assist in the Wild Horse Race event. 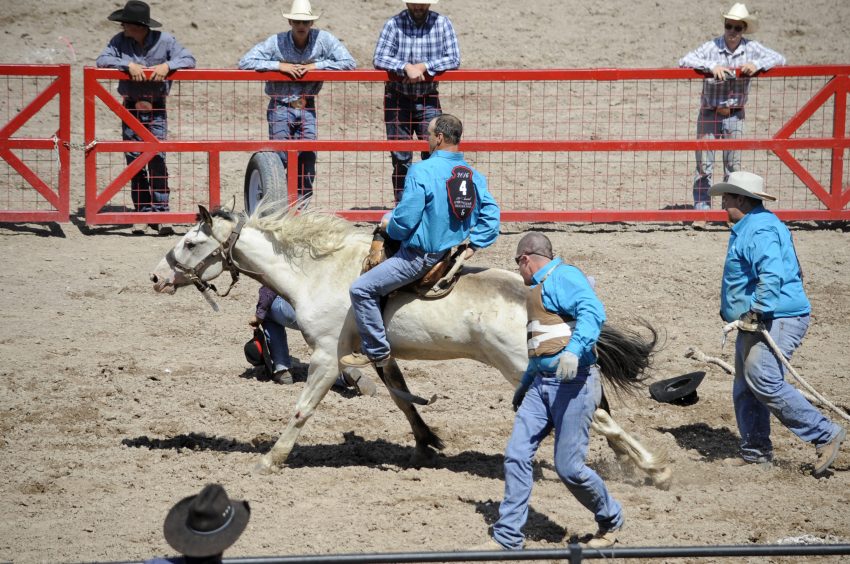 Team members, having completed their tasks, skitter out of the way of the roan paint and leave room for the rider to take on his task, ride the wild horse all the way around the track and across the finish line. 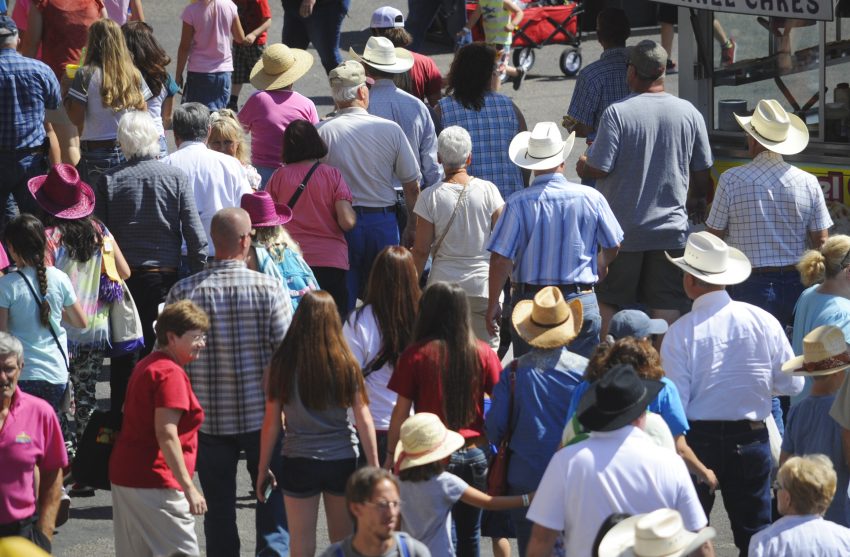 Folks of all ages and types, those within the cowboy community and those just wishing to catch a glimpse inside the cowboy life, come in droves to watch the CFD Rodeo, shop the vendors, and board the carnival rides. 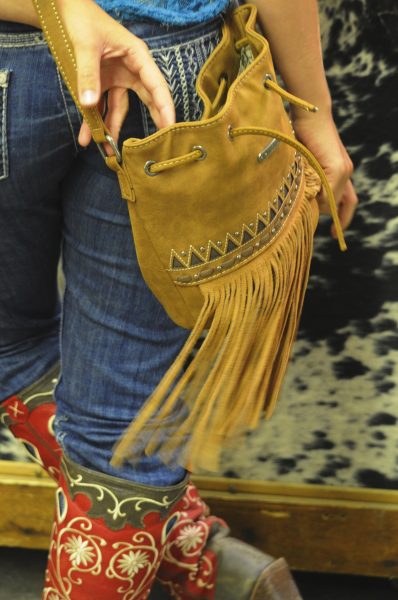 Trends come and go and a current one is fringe. It can be spotted in booths appealing to the younger crowd in addition to the traditionalists. 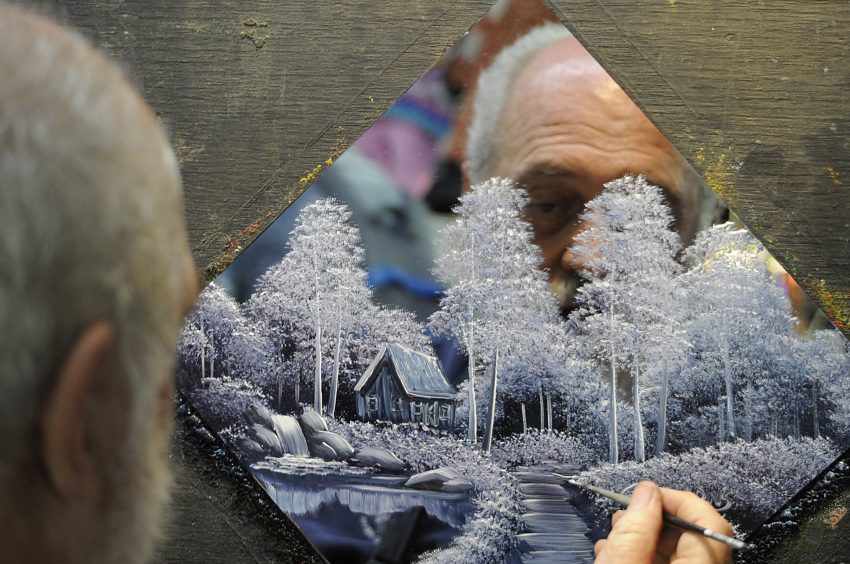 Gary Clemons, of Turner Park Falls, Davis, Oklahoma, focuses on painting a pathway within his landscape. Clemons paints exclusively on mirrors and had a booth at CFD. 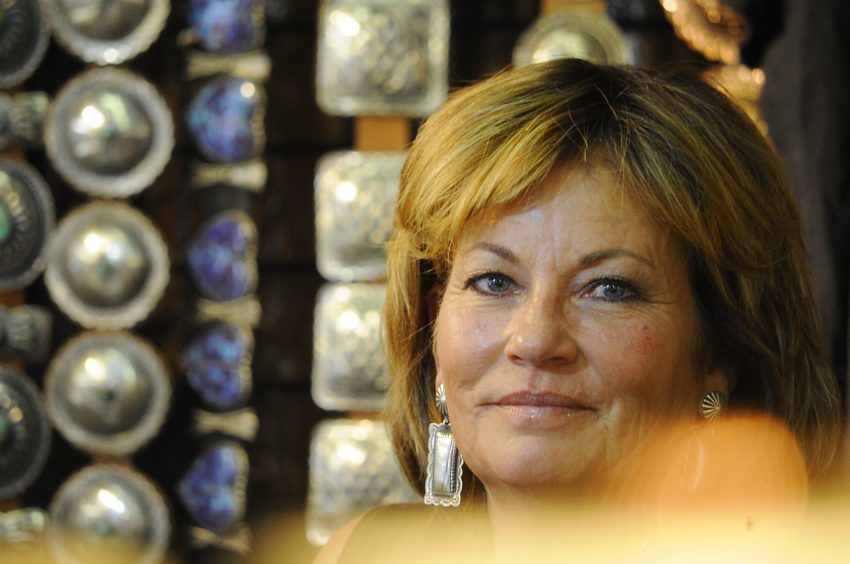 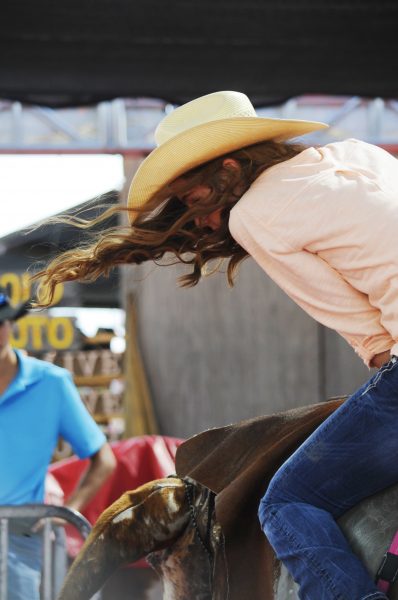 Rodeo attendees can feel what bull riders experience, albeit in a safer manner, aboard the bucking bull ride in the carnival. 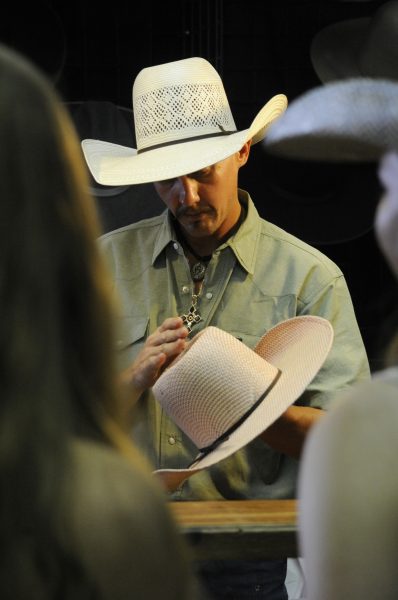 One of five employees in the Rodeo Boot Company Booth, of Palouse, Washington, sharpens the crease in a straw hat as the customers watch and wait. 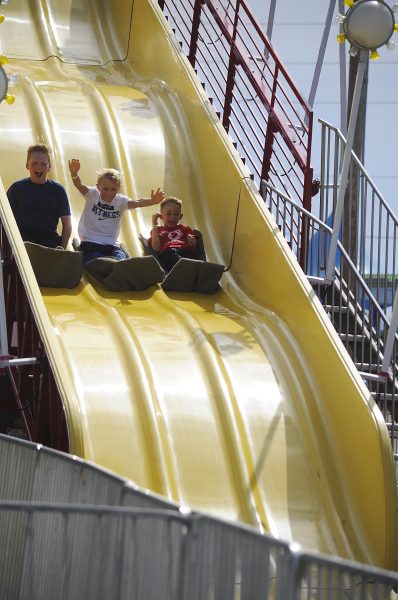 Three youngsters race to the bottom of the large yellow slide in the carnival at CFD.