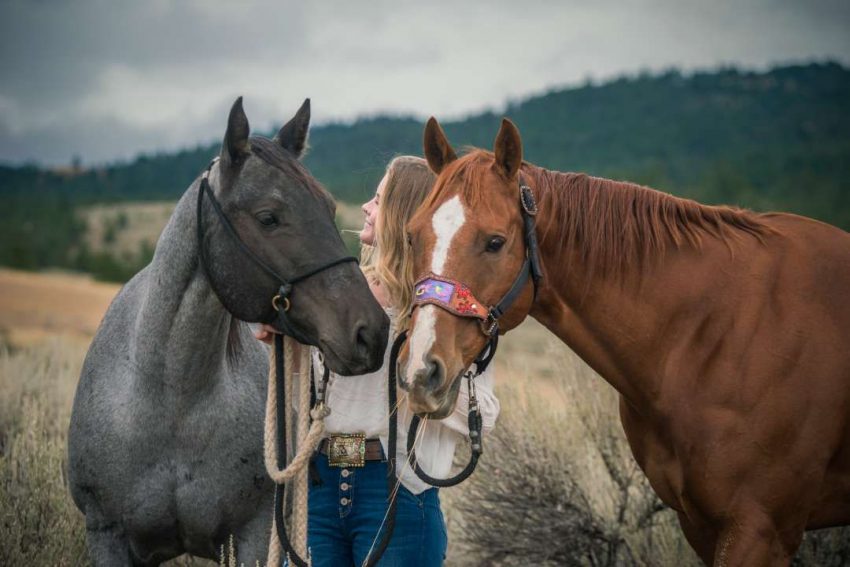 Chenessa McGraw stands with her barrel horse City Boy on the right and his buddy Sis. Photo courtesy Mesa Strain.

Chenessa McGraw is on the edge of making rodeo history.

The Corvallis, Montana cowgirl is ranked second in the barrel racing, heading into this weekend’s Women’s World Championship Rodeo, held in Ft. Worth and Arlington, Texas on Nov. 12-14.

This is something the barrel racer has wanted and wished for all her life.

At the age of three, she was watching barrel racing on TV, when her mom’s best friend, who lived down the road, put her on her mom’s cutting horse, “and got me into the barrels and I fell in love,” Chenessa remembered.

The sixteen-year-old is riding a horse she nearly gave up on. The Flit To Kill For, “City Boy,” a gelding from Florence, Montana, wasn’t professionally trained and hadn’t been hauled much when she and her mom, Cheressa Park, purchased him.

That was three years ago, and the horse had issues to work through.

“The last three years were heartbreaking with him,” Chenessa said. In the beginning, he couldn’t handle the barrels. “We started him lightly, and it blew his mind. He would go in there, and blow up all the barrels. He had a very fragile mind.”

Then he went through a series of accidents and injuries, including hot nails and a stock trailer incident.

But she persevered with him, knowing there was something special about him.

This spring, she treated him for ulcers, and he was a new horse. “He completely turned around his whole world,” she said. “I got his tummy treated, and it completely changed him. This horse is completely different. He’s blown us all away. Anybody in the Bitterroot Valley who knows him knows how hard we worked for this.”

City Boy has a buddy who travels with him, a “support pony” Chenessa calls Sis. The little blue roan mare walks with him up the alleyway and keeps him relaxed and focused, she said. “They have a good bond. Not an annoying one, where he’s buddy sour, but he definitely does better when she comes with us.”

At the Women’s World Championship Rodeo, the top 64 in each of three disciplines: barrel racing, breakaway roping and team roping, compete in Ft. Worth this week. The top four cowgirls in each discipline, which includes Chenessa, skip the qualifying rounds and go straight to competition on Nov. 12 at 11 am, along with the twenty fastest times from the qualifying rounds. Then, from there, the top twelve contestants run at 2 pm on November 12. The fastest six cowgirls after the Nov. 12 performance compete during the PBR on November 14, at AT&T Stadium.  The event will pay out more money: $750,000, than has been paid out at nearly any other women’s event.

Chenessa, who is sixteen, is going to school online so she can pursue her barrel racing dreams. The WCRA, who is hosting the Women’s World Championship, “is the closest thing I can get to the National Finals Rodeo, at my age,” she said. “This is the closest thing to running in the pros.”