Champ joined our family, as a four-year-old, with a trailer load of fellow Shetland/thoroughbred-cross ponies from Bozeman, Montana. Four ponies; buckskin, bay, black, and gray. We found new homes for them all, except for Champ the bay.  He became my younger brother’s home school project.

My brother and Champ’s relationship started off on the wrong foot.  The combination of hot thoroughbred blood and Shetland stubbornness would have been challenging for any 12-year-old.  His saddle fit Champ poorly and often slid, which Champ took as an open invitation to dump his rider.   This bad behavior soon led to a name change, when at his worst Champ became Chump.

Despite his contentious behavior, Champ excelled at local show jumping play days, due to his natural athleticism.  One memorable occasion he demonstrated the extent of his ability, when he leapt upon a large round bale to escape the bullying horse herd.  English or western, Champ never passed up the opportunity to test his rider’s limits.  Snort, spook, or buck never diminished with any amount of riding Champ received.

A shade too tall with shoes and a shade too erratic for an inexperienced rider, Pony Club was not an option for Champ’s future.  As a result, he continued to live with us honing his skills as a ranch horse. No task was to big for our gritty little friend.  Though not a beginner’s horse, I felt Champ was a safe choice when I needed a horse for a young, male suitor to ride.

The poor young man opted to ride his saddle single rig.  An unwise decision on a mount with a horse’s heart and a pony’s withers.  Midday through the day, the saddle began to slip.  In true Chump fashion, Champ took the opportunity to demonstrate his bucking ability. Much to the young man’s dismay, the dire position of his saddle forced him to dismount rather gracelessly.  Twelve years later, the champion bronc rider, whom I married, has not lived the incident down.

Champ’s life as a ranch horse continued, bouncing from outfit to outfit with my brother or myself.  His ability, always defying his appearance.  He diminutive size made roping the branding pen easy, but never affected his ability to drag calves to the fire.  On more than one occasion, he surprised a stranger with his ability to watch a cow.

Despite his quirks, as a saddle horse, Champ had an endearing personality in the pasture.  He acted as a nursemaid to other horses.  He would shepherd the young and infirm through gates and to the feed ground.  Whinnying and fretting, like a mother hen.  His capacity for caring for other horses was notable, but it was his caring for children that we all found surprising.

At the age of fourteen, he became a true kid’s pony.  We’d sifted through a series of spoiled, runaway Shetlands, with little success before we decided to mount our three-year-old on Champ.  With my heart in my throat, I watched my husband through the corral poles as he put our little boy on Champ’s back.  The same horse, who took every opportunity to jump, snort, and spook with an adult, merely tiptoed around the pen with care for the child on his back. 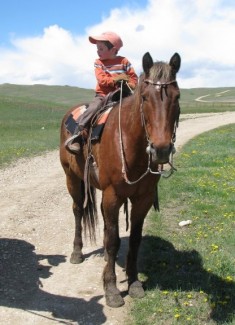 The two of enjoyed six good years together.  They gathered pastures larger than some ranches in Montana and explored the canyons of Idaho.  Champ found his calling.  He excelled in mock gun fights and providing shade for tired little boys.  Unfortunately, as Champ’s age caught up with him the vast desert of Southern Idaho was too much.  Champ was able to retire to the loving arms of a little girl in Wyoming.  Well-loved and well-fed, he left this world July of 2014, the best bad pony I ever knew.