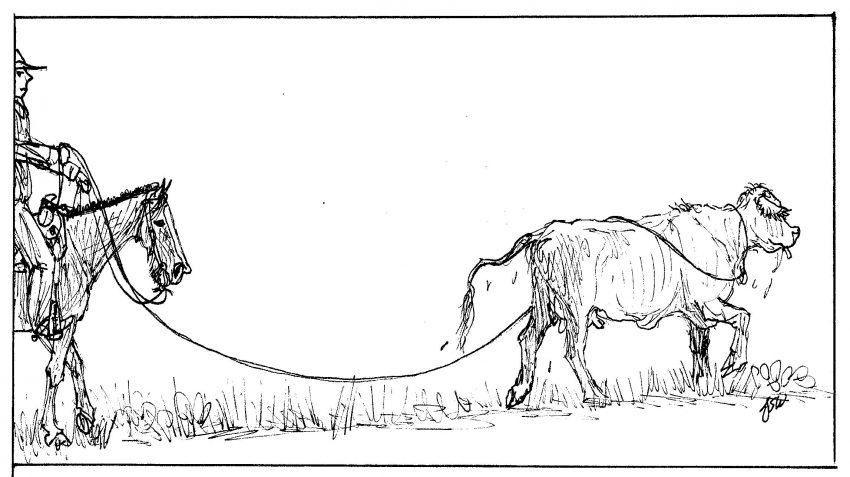 There were six of us kids, strung out over 14 years, and I was the youngest. Dad had his own homegrown crew every time there was any job to be done. My oldest brother was gone to college by this time, but I think everyone else was still home. I was quite a bit younger, so I was little when this incident occurred.

Our cows on the ranch were not exactly pets, and some of them were sired by a good Charbray bull the folks ran for years. His daughters were exceptional producers, but some of them were a bit difficult to handle. We each had some cows of our own, so we all had some of these Charbray cross cows. My second oldest brother, Dave, had one in his bunch we called Jersey. She definitely wasn’t a Jersey, but a nice sized, Jersey colored, long eared, very Brahman looking cow. She was of a difficult nature, as her mother had probably been before her. Jersey known to be a quitter and was always looking for a chance to quit the bunch when we were gathering and moving the cows.

My brother Dave had never had his shingle out as a cowboy. Had made it clear from early on that he wasn’t going to be, but due to daily exposure and a natural ability, had made a good hand in spite of his dreams to the contrary. His horse Rocky was a good looking, well bred, contrary gelding who spent every waking moment trying to outfigure a person, no matter what was going on. His contrary nature made for friction between my Dad and Rocky. Dave and Rocky got along fine, seeing as how neither one of them aspired to be what they were forced to be on the ranch.

On this day, we had gathered the cows and calves and were driving them to the corrals. It seems the calves were pretty good sized, so it must have been toward fall. We were probably going to run them through and spray them for flies. As we got to the big “V” coming into the corrals, ol’ Jersey threw up her head, ears flapping, and made a break for it, heading west as hard as she could run, her tail in a figure 9 over her back. Dad yelled at Dave to go get that no good rip and bring her back, in so many words. Dave and Rocky took off in pursuit, finally disappearing off a bluff toward a dam on the west side of the pasture.

We got the rest settled down and finally got them safely in the corrals. We turned back to watch for Dave. We waited. We waited some more. Dad started muttering about cows and cowboys. He swore. I know now he was starting to get worried, but at the time, he just seemed mad. Just as he said he’d go look for them, up over the bluff comes Jersey with Rocky and Dave trotting behind. Jersey never looked left or right but made a beeline for the corrals. As they got closer we could see that there was a rope between Jersey and Rocky. We got out of the way and Jersey, Dave and Rocky trotted by us into the corral.

Jersey had slobbers running out of her mouth, from the hips back she was painted green, and Rocky was lathered with sweat. Dave’s dark eyes were glittering, still mad. Dad heeled Jersey and Dave got his rope off of her, and she got up meekly and went to the middle of the bunch.

Dad asked what happened and Dave explained that she wouldn’t turn and just kept fighting his horse, so he finally roped her, tied on hard and fast of course, and laid a trip on her. He did it several times, as each time she got up she continued going the wrong direction. The last time, she’d gotten up, and just stood there, trying to catch her breath and maybe her balance. When she turned toward home, he let her go, but just kept up with her with 35 feet of rope connecting them.

It was something Dad would have done, so he sure didn’t scold Dave for treating his own cow that way. I know Dad was pretty proud of his non-cowboy cowboy, and maybe even his nemesis Rocky. He didn’t say too much more about it.

Jersey was no worse for wear, and ever after, stayed in the bunch, minding her own business, not even looking out into the wide open spaces. Danger lurked out there, as she well knew.