Buckskin Joe and His Magic

I’ve had many horses over the years, mostly good, some awful, but this one has lasted the longest. His name is Buckskin Joe, Joe for short. I received him for Christmas when I was a tiny girl, though I don’t remember for sure how old I was. My brothers and sisters got him for me. He was magical. I rode him on many adventures. Matt Dillon and I ran down many a bad guy, him on his buckskin horse, I on mine. Joe could really run, let me tell you, and jump high and far. We chased wild horses, gathered cows, and rode for miles. He never bucked me off, but sometimes he cleared the floor when he was feeling particularly bouncy. 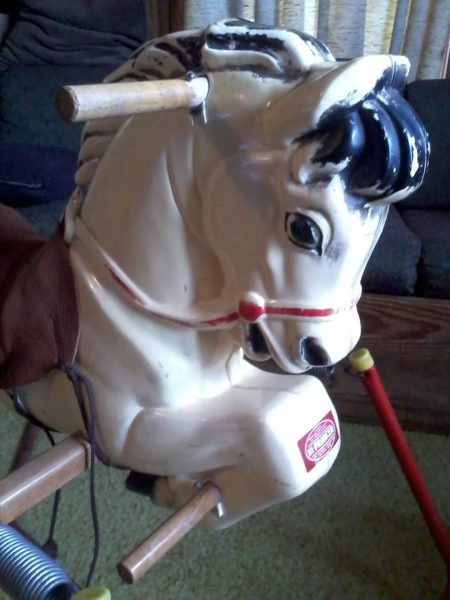 Alas, after several years of fun, I outgrew Joe and moved on to bigger, breathing horses. Joe was moved to the basement to wait for another little kid. Years passed quickly. My nieces and nephews rode him as they got big enough, and he was still just as fast and reliable for them. Time passed and they outgrew Joe, so Joe returned to his basement pasture.
When my son was starting to walk around, Joe was brought to our house from his home at the ranch of the my folks. He adapted quickly to the new place. Colin would pull himself up to a standing position using Joe’s sturdy frame. Joe never moved, just stood like a rock. I held him and helped him take his first rides on Joe and he liked Joe’s springy way of moving, grinning from ear to ear.
I added a suede leather “saddle” to Joe’s slippery back, and eventually a set of stirrups. That solid seat brought Joe to new heights of speed with that toddler cowboy on him. He could get Joe to clear the floor on wild cow hunts with the cowboys on Ranch Album, started Joe in the round pen many times, and even shod him. Some days he went “down under” and rode him off the bluff with Dunny and Jim Craig in pursuit of the mob of brumbies. He roped everything he could stick a loop on, including me. He even stood up on Joe’s back to reach forbidden items on top of the piano. Joe never let him down. But, little boys grow and get too big for a good horse like Joe, so, he was turned out to pasture, so to speak, for many years.
Joe rested and waited for quite a while, but finally, Colin’s little boys came along. Once again Joe was brought out of retirement and little toddlers pulled themselves up to stand by him. First one then the second one rode Joe and learned the magic of his realness. They were 18 months apart, so fights occasionally broke out when they fought over their top horse, but Joe never turned a hair. They took turns roping the wild cattle, hunting wild boar, roping and dragging calves at brandings (one the cowboy, one the calf), steer wrestling, and whatever else their vivid imaginations could come up with. Sometimes he was even a top bucking bull or bronc and tested their meddle with his high jumps, spins and kicks. Joe eagerly cooperated, never faltering one time, no matter what they asked of him.
Then, before it seemed possible, they too had outgrown Joe. So, Joe was once again put away to wait. He has some cracks that have been glued. His paint is faded to a soft hue. Like the Velveteen Rabbit of the story, his paint, like the rabbit’s fur, has been loved off. To those of us who have loved Joe for so long, he’s still absolutely beautiful.
Soon, another little baby will be born. He or she will eventually get big enough to pull themselves up on Joe’s frame and start learning his magic. He will no doubt be real for that little one as well. For nearly 60 years Joe has been a faithful partner for me, then my nieces and nephews, then my son, and now his kids. Imaginations for three generations have made him come alive and be their wings. Even with the signs of age and use, he’s still ready for more. He’s surely been a horse of a lifetime and worthy
of recognition. He’s still got his magic.