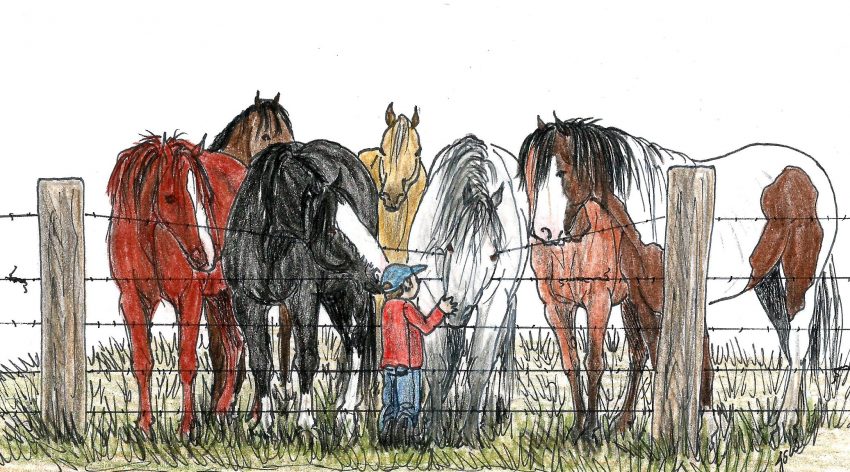 When my son was not quite four years old, we bought a place in the country that was right along a county road. I worried about the traffic as everyone drove it like the Indy 500. Consequently, I had lectured him repeatedly about the dangers of that road and to never, ever get out by it and for sure, never cross it. He promised he wouldn’t.

Across the road from our place was a pasture that had bucking horses and bulls in it. The fence was really good and they weren’t a problem or a concern at all. That is, until the bucking horses discovered my little son.

I was unpacking boxes inside the house and he was playing with his little trucks in the backyard. At least I thought so. As I went by the living room window that looked out across the road, I saw a group of the horses lined up with their heads over the fence. I figured they were just watching the new activity at our house. I started to move on, but something caught my eye. There, standing below the heads of the horses in the middle, was my very small son. He stood there while those big horses sniffed his head and nuzzled him.

Throwing the box over my shoulder, I sprinted out the door. The horses moved back as I crossed the road and watched while I scooped him up, scolding him, and stomped back to the house. I sat on the front step and told him again that he couldn’t cross the road, ever. Again, his sweet face and innocent eyes looked me straight on as he promised he wouldn’t.

I was sure that I’d gotten my point across. But, a few days later, I saw the horses lined up once again, and him right under some of their heads. As I headed out to him this time though, I saw something else. He was feeding them pieces of cake out of a coffee can. Those big, ol’ snorty horses were sure liking their new little friend and would carefully take each piece from him. He petted some of their noses as they did. I hurried across to him as they pushed and bit each other, trying to be the next to get a piece of cake.

That time he got a spanking. Not only the threat of the road traffic, but the thought that he might just crawl through the fence and join his new buddies just chilled me. The grim possibilities were endless. Horses scuffle, kick each other and could really hurt him if he was amongst them, even if they didn’t mean to.

The metal garbage can that had cake in it was in the garage and was handy for catching a horse or feeding one while saddling, as we didn’t have the barn set up yet to keep our tack there. If he stood on something, he could get the lid off and reach in and get the can and the cake. I knew his addiction to horses would make this continue, so I devised a fastener on the top of the can that kept him from getting it open, and very nearly us as well.

I still watched him closely and nearly every day the horses came to see if there was a handout to be gotten. They’d nicker at him, trying to call him over. I’d watch him stand in the driveway and gaze longingly toward his friends, but he stayed on his side of the road. It was a hard lesson, but, he finally got it. As far as I know anyway.

The attraction to bucking horses stayed with him though, as he likes working as a pickup man these days. Some things never change.