I used to day work for many ranchers when I wasn’t too busy at home. Doing that led to many interesting experiences. Some that required quite a bit of bravery.

A registered Angus breeder hired me to come and help them fertility test all of their bulls. We had finished up testing about 70 sale bulls and he wanted to test the big herd bulls as well. Those big ol’ boys were bruisers! All were over a ton and were in a big lot a ways from the working facilities.

We walked down the gravel feed alley to get to that pen. From there on the mud and other natural substances in the lot were nearly as deep as a mud boot is tall, as it was early spring just after the frost went out. I was teasing him about having $50,000 worth of saddle horses on the ranch and we were out there slogging our way out amongst the bulls playing cowboy afoot. While we were ragging each other back and forth, we’d gotten the bulls pushed over to the west side of the lot and toward the gate.

As the bulls started moving, they remembered that they didn’t like each other that well and started pushing each other around. Mostly they were just rough housing, but a couple of them got pretty warmed up and serious about their fight. There were tall mounds in the pen for a dry spot to rest for the bulls, and I was working my way around the edge of one of those.

Some of you will know this, but for those that don’t, I’ll explain. As in a fight of any kind, if the loser lives, they must retreat. Bulls do that in an epic way. The loser may run over a fence, tree, pickup, horse and rider, water tank, or anything else in their path. They are in full retreat mode with the other bull pushing them from behind. If you think a ton or more of bull can’t move quickly and with speed, you are wrong.

I knew I was in a precarious place so was hanging back as best I could. I was on slightly less boggy ground, but it was still halfway up between my ankles and knees. Suddenly, the bull fight broke up and the loser whirled around and headed straight toward me at full throttle, the other bull in hot pursuit. If he saw me, he didn’t care. He was devoted to getting away from his adversary!

Yelling and using my flag whip furiously on the lead bull’s head to try to turn him. I tried to dodge to the side, but my feet just couldn’t move fast enough in the mud. Both bulls went by me close enough to touch them.

Heart pounding, I turned to follow them when the owner said “Man, you’re brave to hold your ground like that!” I stopped and looked at him and said, “I’m not brave! I’m the biggest chicken alive. I have bad knees and can’t run so I have to fight!” I’m sure the event had him worried too, as day workers are hard to find, but he covered it well by nearly collapsing in laughter. 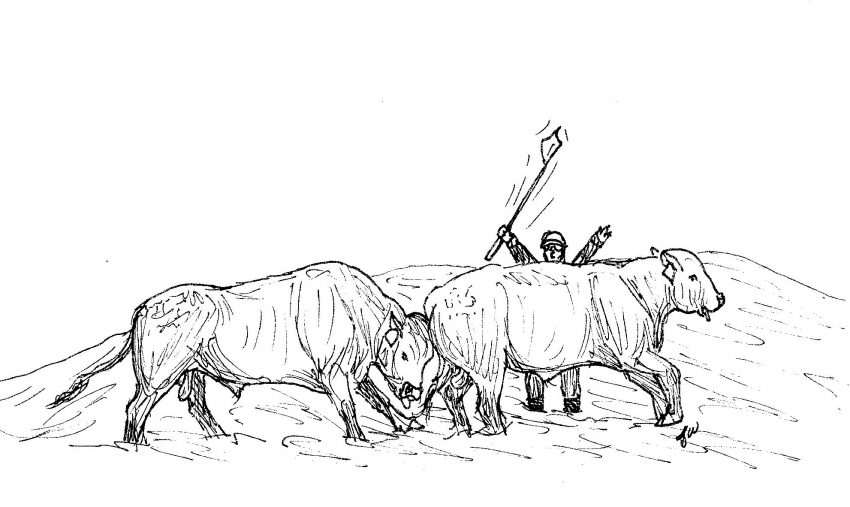