It was late summer when I got a call from a guy asking me if I could go get a bull out of his cows and haul him to his place. The bull had a bad eye and he needed to doctor him, plus it was time to get him out of the cows. I knew these folks raised registered Herefords on their little farm, but didn’t know much else about their place, as I’d never been there.

I set out early in the morning since handling an unknown bull might not be a five minute project. I took my top horse, Kelly, as I knew that however the bull wanted to do things, Kelly was the one to be doing it on. I drove a trail road out to the edge of nowhere where this little bunch of farm cows were being pastured.

When I rode into the cows they stared in amazement, probably having never seen someone on a horse before. I slipped through them quietly when I spotted the bull and eased him out. He was a big, old bull with lots of horn and big plattered out feet, along with a very badly infected eye. He trailed along easy enough, not putting up a fight at all, and when we got to the trailer, he looked it over for a moment and stepped right in. I think he was ready to go home and get some pampering.

I shut the divider, stepped off of Kelly, tied my reins up around his neck and he hopped in the back of the trailer. Easy as pie, I had the bull loaded in less than 30 minutes from arrival.

When I got to the little farm to unload the bull, I followed my telephone instructions on where to put the bull. The guy wanted him in the corral, which sat out in the middle of a weed patch that was interspersed with old wire and other horse crippling junk. So, I pulled down into the pasture a ways to where I could turn around and point the trailer toward the corral to unload.

Kelly would ride facing forward in the open top trailer until I walked to the back, then he’d turn around and be ready to hop out when I opened the gate. He did it this time too, looking around the place with interest. I’ll pause to tell you right now that Kelly was the gutsiest horse I’ve ever ridden. He was fearless and in the 22 years I rode him he only ever even shied at something once.

I opened the end gate and Kelly proceeded to unload. He had just started to step out, had one foot extended, when he absolutely froze in place. His eyes were big, he let a roller out his nose and he stayed just like that, foot dangling in the air, as I turned to see what he was looking at. Walking out of the eight foot tall weeds was a huge sow with a herd of little pigs following her. She was grunting along and crossed the clearing between weed patches about 40 feet from the back of the trailer. She and her piglets disappeared into the weed jungle. 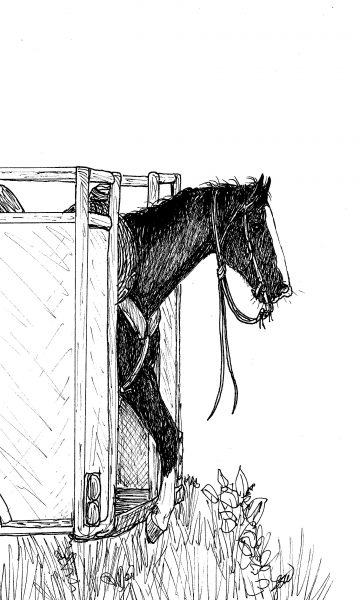 Turning to look at Kelly, he was still frozen in place, foot dangling in the air. I spoke to him to step on out. That seemed to snap him out of his trance and he withdrew his foot, backed a step and turned around in the trailer, facing away from the gate but keeping an eye on the weeds where the pigs disappeared. It took some sweet talking on my part and getting ahold of the reins to finally get him to step out, and he never took his eyes off those weeds.

I got the bull unloaded and he moseyed down to the corral easy enough, which is a good thing, because Kelly was absolutely unable to think about anything but that pig. He blew and snorted as we passed through where the old sow walked, he sniffed the air and squatted, staring hard into the weed forest.

It’s been said that horses react to a hog the same way they react to a bear, so I think that’s probably what happened with Kelly. In his mind he had seen a big ol’ grizz and a whole bunch of cubs within horse eating distance of him, and he wasn’t going to take any chances. Needless to say, it sure didn’t take him long to load in the trailer when we got back to it!