Last year, my husband Boe and I went to our friend’s branding. We arrived on time, were ready to ride out when the group was, and we stayed with our friend on the big loop, per his orders. It was a lovely dewy morning and the chill was just starting to come out of the air, the fresh was knocked off the horses, cows and calves were pairing nicely and heading toward the pens.

As if on cue, a group of riders comes along the fenceline we’re pushing cows along, heading all the pairs into the middle of the pasture. They were the late bunch. There’s always one, isn’t there? They blew up the plan and torqued the boss. He came up to our bunch, failed to apologize and mostly just said, “oh well,” then proceeded to ride in front of the 20 or so fanned out riders, including the boss, in his persuit of who knows what.

He’s not a young kid, he knows better, or so one would think. We’ve probably all run across these “characters” and left their company feeling like you have salt in your coffee, so here is a poignant reminder of how we should really act at brandings from Keystone Equine:

Believe it or not, there is etiquette in the branding pen. We must be getting old around here because lately, the brandings we attend seem off-kilter… Some of these changes are good and others, not so much. While traditions might change from ranch to ranch – and you are free to do what you want at your home place – there are unspoken rules that keep things running smoothly when you are working some place else.

When Mike was a boy, women were not welcome at most brandings. They could bring pies and help the rancher’s wife to feed the crew, but few were welcomed at the pen, even with cameras. So the realization that women can be accomplished stockmen is a good change! Nowadays, while some ranchers are choosing not to brand their calves, it is still the accepted norm for identification in an industry where the bottom line is tight and rustling still occurs. Pain management is now administered, which is another healthy change that didn’t exist years back. Whether or not calves are actually hot iron branded, the gathering of hands to vaccinate and castrate calves is still referred to as branding day. 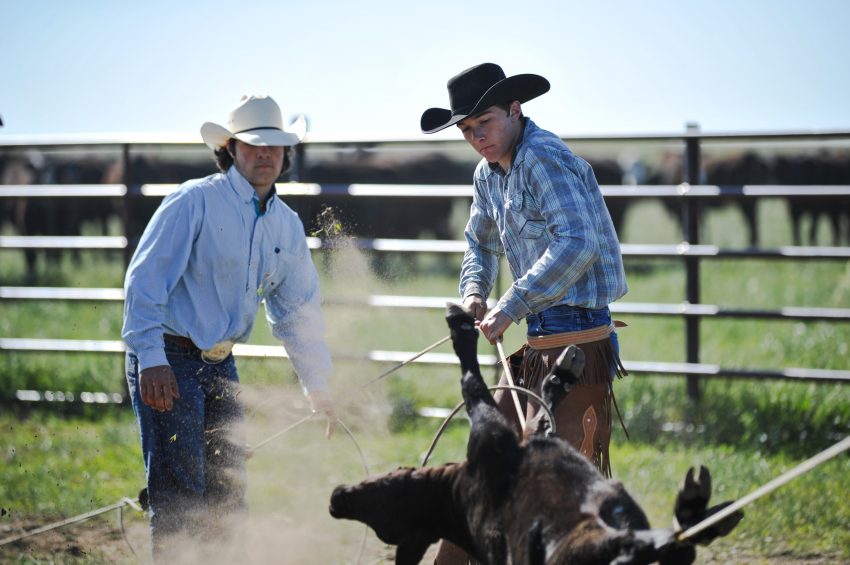 The day begins early when the herd is gathered to the trap and the cows are cut out, leaving the calves in the branding pen. Often a few older cows will be left in to settle the herd. Supplies are organized and set up in the back centre of the trap; all of this is seen to and timed to be done when the crew arrives. If you’ve been invited to the gather, get there on time and when the gather is done, get off and put your horse away. Wait until the boss assigns jobs; don’t start cutting or swinging your loop while other people are still out gathering cows and calves. Do not assume you are the best roper and get moody when you are not asked!

Roping, castrating and dehorning is traditionally done by older crew members who have done their time; young boys packed the tar pots and worked their way up to wrestling. Too often, we’re seeing older guys in their fifties and sixties wrestling calves, which is bloody hard work, while some twelve year old kid ropes. This is not correct! By working their way up the ranks, the younger generation learns that at a branding, all jobs are important. They must learn to not goof around or get moody, disrespecting the calves and the ranch’s revenue. Kids need to go up through the ranks so they learn how it all works together.

Anyone invited to rope in the branding pen must ensure they are on a well broke, gentle horse. Thirty day colts are ideally made at home and not at a neighbour’s branding. A horse that bucks or gets chargey in the pen is a danger and an embarrassment; we’ve got rid of otherwise decent horses simply because of this. Ropers must not get rammy or interfere with one another; they should be observant about what is going on with others in the pen and remember to look behind them! Calves should be brought in steadily on a medium length rope; long ropes and spectacular shots are a danger to everyone. A good roper will keep the loops below the hocks, doing his or her best to bring the calves in on their briskets as close to the branding pot as possible. High hocks are hard on the wrestlers because the calves buck wildly and are hard to control. For those on foot, horses bringing calves in have the right of way, so heads up! 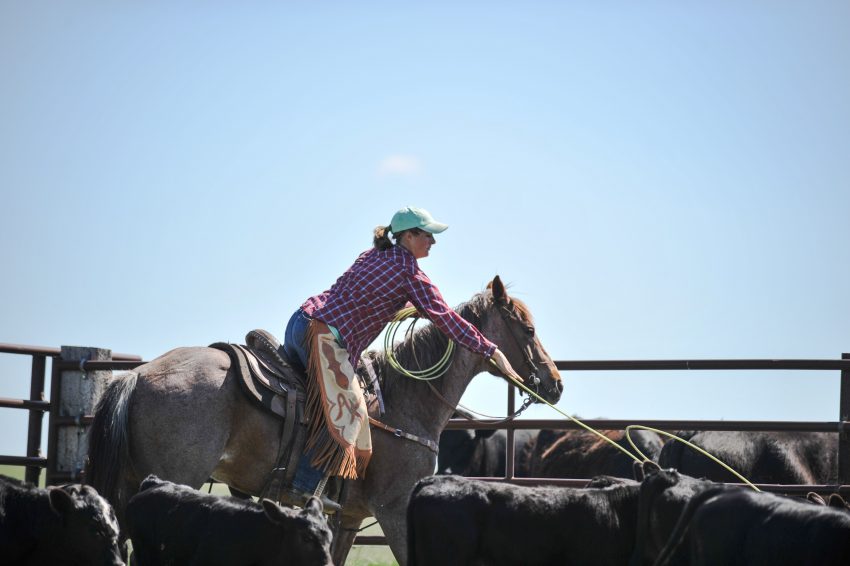 Wrestling is hugely important. There is technique in flipping, taking the heel rope off and holding the calf. It is correct to remind teenagers to not slam the calves down, reef on them or kick them while getting up; it’s a respect issue and one we’re seeing too much of these days. Wrestlers need to know that they can hurt a calf – and because it’s getting harder and harder to put a crew together any more, know that the slings used to replace traditional manpower can really strain calves. Inexperienced wrestlers should be paired up with someone who knows the job; they’ll learn the technique quickly and ultimately, it keeps everyone safe.

When the calf is down; don’t rush in like the Mongolian hordes! Wait for the wrestlers to gain control. Then the branding, castrating, tallying, dehorning, vaccinating, ear tagging and other marking all happen in due order. When there’s an order, it’s easy for the wrestlers to notice if a calf hasn’t been vaccinated, for instance. A rhythm results, an efficiency of movement; the entire procedure, run like clockwork, will have the calf down, doctored and up again in minutes flat.

The beer stays in the cooler until the last calf is done.

Tiny children in the branding pen are a danger to themselves and everyone around them. They can learn to help the castrator with the nut pail and spray by age eight or so; then, when strong enough physically, they can go on to wrestle. We are seeing so many people putting tiny children on horses to “rope” and while the photos are precious, the danger these little ones are put in if something goes wrong is untenable. When horses, ropes, cattle, fire and crowded conditions are together, the chance of something going wrong is significant. Please don’t risk it.

On foot, you are either standing behind the branding pot or at the sides; keep the working area clear. If you’re outside the fence or taking photographs, be at the back of the trap, not up near the calves, disturbing them and making the job hard for the ropers. If you are not of use in the branding pen, chances are you can be put to work in the kitchen! See your fill then go back to where the meal is being prepared: peeling carrots and potatoes, setting up tables and wash stands, carving meat, carrying food, serving, clearing up, washing dishes… Trust me, you’ll be asked back!

One last thing, after the cattle are turned out and mothered up, please see to your horse. The number of hard and faithful workers that stand tied for hours, unwatered, still saddled, while their riders nurse their beers is just bad stockmanship. Have your visit and your meal, then bid farewell to the host family and go home. They are exhausted and still have lots to do before they can find their pillows. Haul home sober or arrange to have a buddy who will do so beforehand. This is 2018, for God’s sake! Stay safe, stay workmanlike and uphold the traditions of our land. 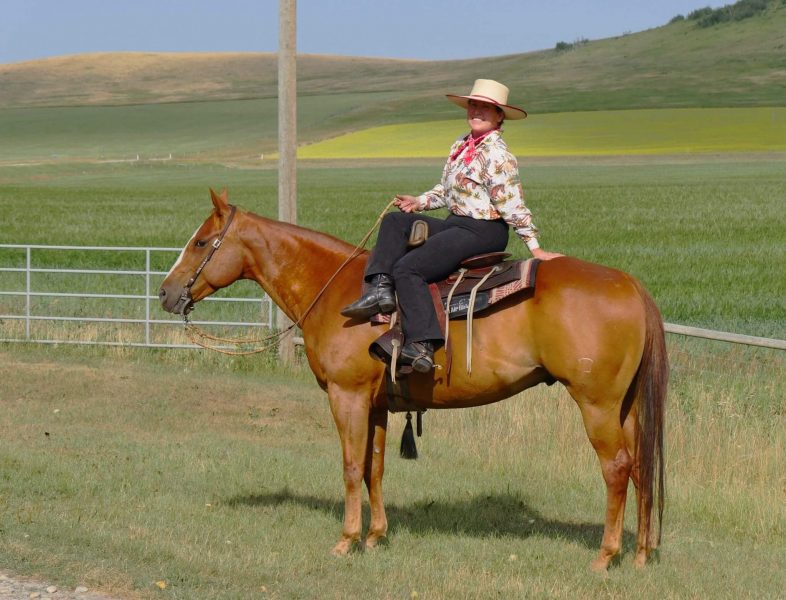