Boss of the Band

It was late spring and time to take some mares to a stud I’d raised and retained breedings to. I had chosen two grand old mares to take to him and one of them had a rather new foal at her side. I’d carefully loaded the old, crippled black mare Annie and her filly in the front compartment of the trailer and the other mare, Dolly, in the back. It was a long haul up to the pasture with several miles of it over pasture trails.

I was following the owner and we pulled out into the middle of the pasture, far from fences and other hazards. The band of mares and the stud, Jay, had spotted us and came at a high lope. We quickly unloaded the dry mare Dolly and she and the others trotted off a ways and were getting acquainted. While they were distracted, we unloaded Annie and her filly, trying to give them a little time to get their “land legs” before the others noticed them. I pulled the halter off of Annie on the far side of the trailer, and saw that Jay and Dolly were getting acquainted very quickly as she was being covered right that moment.

Annie’s foal nickered at her, scared I’m sure, and the other mares, mostly young, dry mares and some that hadn’t foaled yet, heard her and came charging over. Suddenly, it was like a tornado of horses. Annie was whirling in circles, trying to keep her filly in the middle and safe from all these strangers. Crippled Annie was trying her best, but the risk was terrible for that little foal, and there was nothing that the owner or I could do to break it up without getting wiped out ourselves.

Out of the corner of my eye I saw Jay slide off of Dolly and he came as fast as he could run. Ears flat and neck snaked out, he launched himself into the middle of the melee. With his authority as the stud and his agility, the band of mares quickly dispersed, leaving Jay and Annie and the foal standing together. She was absolutely exhausted. Sweat was dripping off of Annie, her foal was tucked in a terrified little bundle against her side, and Jay was on full alert, glaring at the other mares. He circled Annie several times, snaking his neck toward the rest of the band. Then, assured that they were going to keep their distance, he touched noses with Annie, nuzzled her neck, and sniffed the foal thoroughly.

As we watched with relief, our hearts still pounding, Jay nickered at Annie and walked away with her at his side, the filly following. The other mares kept their distance, some smarting from hard nips they’d received from Jay. My other mare, Dolly, approached and rejoined Annie. Jay nuzzled her nose too, then with a quick snack, Annie’s exhausted but unhurt filly flopped down on the grass and went to sleep, Annie and Dolly standing over her and Jay staying between them and the others.

I had never seen anything like it. Jay had never seen either mare before. The foal obviously wasn’t of his blood and band. Yet, as a true guardian of the band, he had done a terrific job of protecting the foal and mare from the others.

I had heard stories of a foal being stolen or killed by a bunch of mares. I was greatly reassured by Jay’s actions, and that barring illness, my mares and the little filly were safe in his care, allowing me to leave them there with peace of mind. 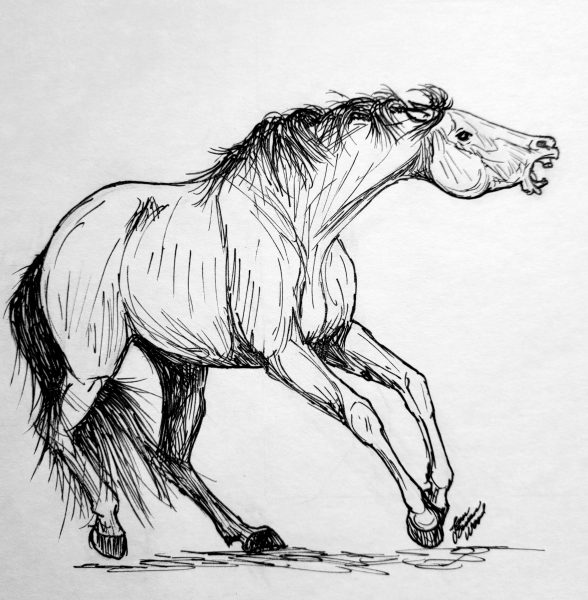