My high school years were spent going to school and doing the riding on the ranch, since I was the last kid at home. In the winter, my Dad was gone about every week day buying cattle, so it was my job to do chores and any riding necessary when I got home from school.
The winter weather was always a concern in northwestern South Dakota, and the weather forecast and barometer were attended closely. Many days I’d get home from school, saddle a colt and start gathering stock. First I’d ride to the pasture where the band of ewes were wintering. A winter corral was built in a very protected place to hold the sheep during storms. Usually they stayed put in it and didn’t walk over the fences when they drifted under. The sheep never wanted to go into that corral, so the dog and I had the job of making sure everyone was in it before I shut the gate. Then I’d trot the mile or more back to the pasture where the weaned calves were wintering. There was a good winter corral for them off of the hill by the place, but they had to be gathered into it and it’s south gate was in a tricky spot with a willow choked creek on one side and a steep hill on the other. The pure, unadulterated ignorance of calves that age was not improved by it getting dark by the time I gathered them.
One winter, I was riding a colt of Dad’s called Fox. He was probably a four year old that year. He wasn’t the brightest individual to start with and kind of woke up in a new world every day. He wasn’t broncy though, so that was in his favor. That fall and winter I had realized that Fox couldn’t see. I rode him nearly every day and knew him well, so I had experienced the change. I told Dad and he got mad and told me that I didn’t know what I was talking about and that the horse was fine. He said I was just saying that because I didn’t want to ride him. Well, yes. That was true. A blind horse is not the greatest to ride in rough pastures so I really didn’t want to ride him. But I did. Week after week, as Fox relied entirely on my guidance to get around.
I had done the usual gather of the sheep while it started snowing hard. By the time Fox and I had made it back to where the calves were in the South Pasture, the wind was picking up. It was also dusk as I gathered and drove the calves into the wind toward the corrals. Naturally they didn’t want to face that wind and snow and kept turning into the willows along the creek. It was rough in amongst those willows and trees, plus there were deep cow tracks frozen in the mud along the creek, which were covered with snow. Some steers went off into the willows and I rode Fox in after them. I took it very slow and was guiding him carefully, talking to him a bit as he was afraid of the creek since he couldn’t see the channel or anything else.
We had gotten the little steers started out and back to the bunch when Fox’s front feet slid off into a couple of deep cow tracks. He apparently thought he was going off into the channel and he panicked. Afraid to turn, he threw it into reverse and started back out through and over the willows. As he backed as fast as he could, he ran a big branch of a dead tree between his hind legs. That stopped the backward motion, but now in a complete panic, he took off running. It was so close to dark that it was hard for me to see where we were going other than I knew it was south. He was in a nobody home, dead runaway. I knew that not that far south the creek bent around and the channel was deep and pretty abrupt and that we were going to run right off into it if I didn’t get him turned or stopped. He had no brakes, so a turn was my next hope. I took hold of my right rein and pulled his head around just far enough that he changed directions enough to miss that bend of the creek. What a relief! But, another half mile and the creek would be in front of us again. My only hope was to get him turning in a big circle until he ran out of steam. Unfortunately, the meadow I had to work with had some deep gullies across it that the floods had created over the years. They were covered in snow, as the snow was deep everywhere, therefore, I couldn’t see exactly where they were in the near total darkness.
Just when I concluded things couldn’t get much worse, they did. In spades. I had put some neat little alligator snaps on my reins so I could change them from bridle to bridle. They had worked splendidly. Until they didn’t. The one holding my right rein broke and Fox had his head back and was headed for the creek! 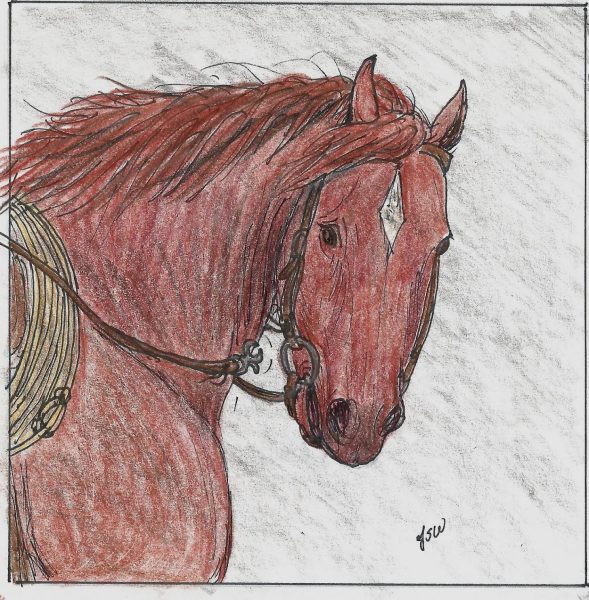 I changed directions quick and pulled his head around to the left, hoping that the snap on that rein wouldn’t fail me. After many big laps on the meadow, missing the gullies, Fox finally started to play out. As soon as he slowed down enough, I stepped off and got him stopped. We were both drenched in sweat in spite of the cold and wind.

By feel I took the broken snap off of my rein and put the rein back on the bit. I led Fox part way back, just letting him and I both get the quiver out of our legs. I finally got back on, knowing we still had the calves to pen.
Thankfully they hadn’t scattered much, just kind of holed up in the willows. I didn’t ride Fox back into them but got off and led him. If he was going to have another runaway it wasn’t going to be with me on him, that was for sure. It was with great relief that the calves were safely locked in the winter corral. Fox and I headed in and I brushed him until he was dried off and his hair was fluffy. He was exhausted, as was I.
I’ve never used snaps on a set of bridle reins since and cringe when I see someone else who does. It was a wild ride in the dark and snow and I wouldn’t repeat that runaway for all the alligator snaps in the world.
Incidentally, my brother was home for Christmas in a week or so after the runaway. He walked out in the corral and touched Fox on the face, thinking Fox had seen him coming. Fox flung himself backwards and ran into the fence, scared to death but not injured. It was then, after my brother told Dad, that Dad finally believed Fox was blind.