Big Horse In A Small Package 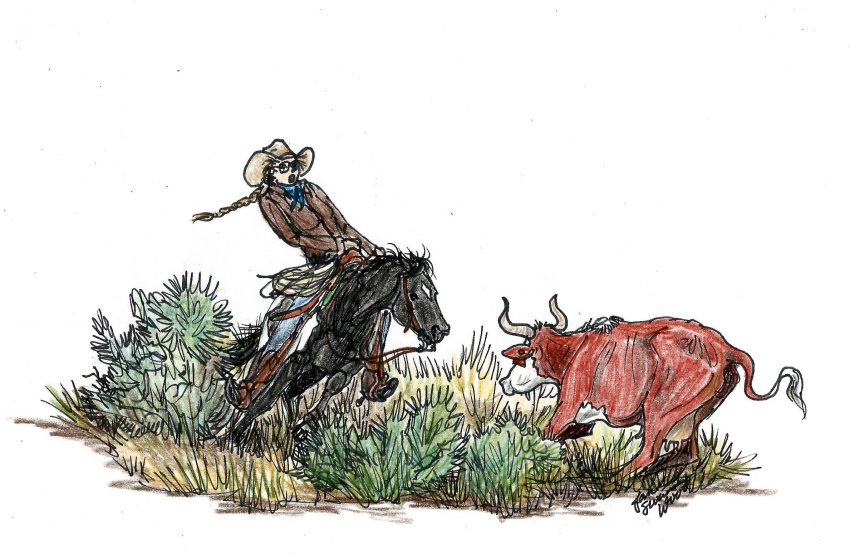 Many moons ago when my oldest nephew was just a little feller, my sis told me that they were looking for a good sized pony for him to ride on the ranch. They had three kids, so the pony would probably have to be a starter horse for all three. So, I was looking for a pony pretty seriously.

I mentioned it to my cowboss and he said he had one. I hadn’t ever seen the pony, but he told me he was really broke, about Welsh sized and a pony/Thoroughbred cross. I was interested.

A few days later, we found ourselves on the south side of the ranch horseback. In the pasture next to us was a little bunch of horses that no one rode anymore. The pony was with them. They loped down to the fence to see us and my boss let them into a hay corral that was along the fence line. He built a loop and dropped it over the pony’s head when he loped by. The pony stopped instantly and walked to his horse. My boss quickly rubbed the pony’s back clean then switched horses, saddling and bridling the little guy and putting the loop around the big horse’s neck. We were a long way from the house and I could envision it being a long ride back for him, but I was so wrong. The little guy could walk like crazy and made the led horse trot fast to keep up.

Little Champ was made like a perfect Quarter Horse. He was a tobiano with a dark head and eyes and quite flashy. At about 12 hands, he was just a perfect size for a kid. I decided that I would ride him some to get to know him before I called my sister.

I like big horses and my horses at that time all were and cinched deep. I dug out my shortest cinch and still had to nearly wrap it around fat little Champ to get it to fit him. I finally headed out to the calving pasture to check about 60 head of the last springers. I rode the pasture full length and didn’t find a one except for a couple cows with calves born late the day before. Sure enough, the gate in the southwest corner was down, the gate stick broken. My springers had escaped.

The pasture they had gotten into had all the pairs in it. I’d paired them out through that very gate and they were scattered over about a four or five section, rough pasture. The hope of getting the springers found before they’d scattered too far was strong, so rather than go all the way back and catch a different horse, I just kept going on Champ. The little feller could really walk and actually loped nice, so we got over the country pretty fast, though the sage brush was hitting me on the knees and the ground seemed awfully close.

I got into the pairs and the springers and kept riding until I didn’t see any more springers and had my tally, then turned back to start sifting them out ahead of me. Of course, they had smelled the sweet smell of freedom and didn’t want to go.

Most gave in pretty quickly because they were quite heavy with calf, but some were really determined to stay with the pairs. My little horse was really doing a job keeping them going. He’d turn so hard that my foot would hit the ground, and I’ll tell you, he was darned hard to stay in the middle of!

We finally had them sorted off and headed them back to their pasture. I was sure impressed with that little guy. He was all horse and I was tickled pink with him. However, my legs were tickled black and blue from the swells of the saddle from his hard turns cutting the cows.

My sis bought Champ and he proved to be a bit hot for her oldest son, who didn’t have his shingle out as a cowboy, but the second boy and old Champ were the best of buds and went many miles together before Champ passed away.

I’ll never forget riding the little guy over that big pasture and feeling like I was on a wild carnival ride sorting those cows. He was a whole horse packed in a small body. He was a good one.