Big Calves and the Attack Chicken

We had spent early morning gathering the cows and their big, soggy calves. Handling them quietly to reduce shrink, we had them in the corrals in preparation for hauling the calves to the sale barn that day. It was my Dad, brother Bob, and me doing the cow work that day. Keeping the calves quiet and the cows cooperating, we had sorted cows off of calves in two different corrals. The calves were by Charolais bulls and I remember to this day how fancy they were. There wasn’t a sorry one in the bunch and Mom and Dad were justifiably proud of them. They must have weighed well over 600 pounds and their hides just rolled on them over the fat on their backs and ribs. Their hind ends were rounded nicely and their hair just sparkled. Dad always sold when the calves were on the gain and “bloomy”, which was indicated by the hide being loose on them and their hair shiny and fluffy. Sometimes that was hard to do with fall weather, but on this particular day, they were just right.
The calves in the pen on the west side of the barn were closest to the crowding pen and loading chute. Since we were sorted up and ready to load, it gave me a moment or two to take some rare pictures of them on my little Kodak instamatic camera. I eased around the edge of the pen and those big calves barely moved. As I eased around to the southeast corner where a gate was, I noted a tiny Banty hen peering out from under a grainery that was part of the south side of the corral. It didn’t really concern me, as I didn’t figure she’d lead her tiny chicks out from under there with all those cattle looming over her. 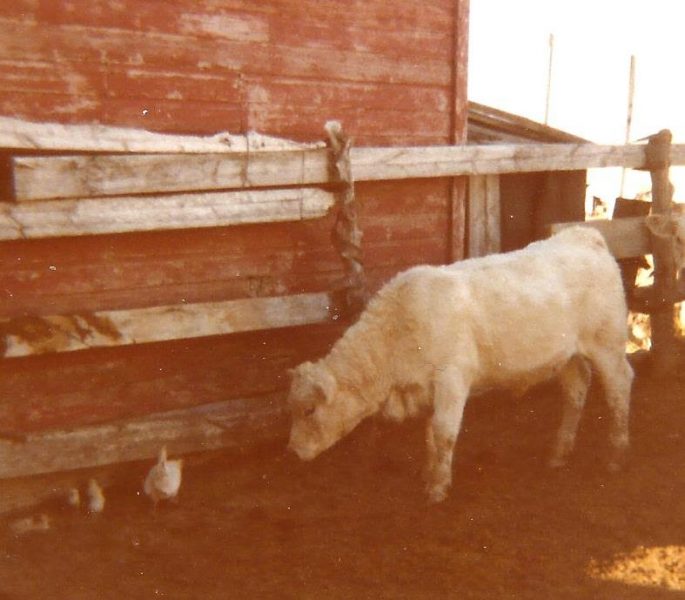 Boy was I wrong! One big steer calf was closely looking at the little hen and chicks when she decided it was too close to suit her. She let out a warning squawk and landed square in that big calf’s face, flogging him with her wings and pecking his head. He let out a beller and it was Katie bar the door! That whole pen of calves took that beller as a danger signal and they lunged several deep against the north side of the pen where the heavy, 16 foot gate was. The huge post that the gate was hung on let out a crack and suddenly it gave way and the gate went down under the tons of young bovines that were piling on it. That pen was suddenly empty, Dad was cursing a blue streak, and that little hen victoriously fluffed her feathers and strutted out of the pen with her little chicks in tow.
That gate was pretty critical for the resorting and then loading of the calves, so Bob trotted out and got the tractor so the whole shebang could be lifted and stood upright from the off side. Then it was chained to the loader on the tractor so that the gate could be chained to the post at the other end as the latch was destroyed. The calves on the east side of the barn were let through into that pen, then the other calves, now all wound up and on edge, were put into the pen on the east side, where hopefully no Banty hens were hanging out. By this time, it was time to load, so the relaxed calves were loaded first, then only as many of the nervous calves were let through the barn and taken straight to the crowding pen. We didn’t want them to make a try at that big gate, even with the tractor there supporting it. None had been injured in the first round so a second round was going to be avoided at all costs!
We got the calves shipped that day without further excitement. The little hen got her chicks raised without having to attack the bovine nation again. The post was replaced and rehung. Ever after though, we double checked to make sure there were no attack chickens anywhere near the pens.