Barrel Horse On the Loose Q&A

Yesterday bore witness to the cowboy corner of the internet watching a video of a barrel horse that got loose at the Ft. Worth Stock Show and Rodeo and ran a nearly-clean barrel pattern all on her own, with one small, understandable slip-up at barrel two. Whenever I see something like this, I feel like I just have to know the story behind it, so I reached out to the owner, Lexi Doud, and the mare’s breeder, Sue Fortner, to see what they think of the hubbub around this talented mare, Think Rich Dazzle.

If you haven’t seen the video by 3-2-1 Action Video, check it out 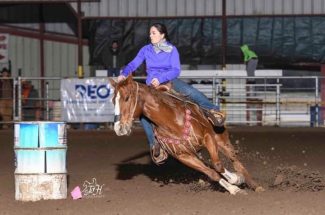 Tell me about your mare and your journey with Dazz to this point:

As much as I would like to claim that I trained her I can’t take the credit for that! Sue Fortner out of Wyoming raised and trained her and won on her until I bought her in 2012. My dad was actually up in Gillette and saw her run in a jackpot and she caught his eye. She had a bad slip at first barrel and she got right back up and smoked a run, he said that is one gritty mare!

I had recently sold one of my horses so we drove up there to try her, and it went great so we bought her! She was finished when I bought her, I just tweaked a few things with her and myself to make us more compatible. The biggest thing I believe that I did was get her into a great performance vet. Dr. Erika Hanna really helped her and found things that had previously been over looked and got her feeling great and she really started working and clocking phenomenal. She is still the one to take care of her now!

I sold her in 2016 so I could buy a new trailer. A funny thing about her is when I had her for sale she was very naughty when people would try her. My vet joked it’s because she knew what was going on and she wanted to stay with me! She would do the craziest things with people, like once she ducked in front of the third barrel, had never done it before and never did it again, or she would pretend like she didn’t even know what a barrel was and didn’t know what she was supposed to be doing. Then I would get back on her and she would win again!

I bought her back recently actually with the intention to breed her. She is 16 this year and I would love to get some babies out of her since she is such a nice mare and she is special to me, we have won and been through a lot. She is booked to Ain’t Seen Nothin Yet this spring! I wanted to run her just a few more times before she was bred for sentimental reasons. She has a great personality she is very sweet and laid back until it’s time to run barrels then she is amped up! I can hop on her bareback in the pasture with just a string around her neck and she will do whatever I want her to. 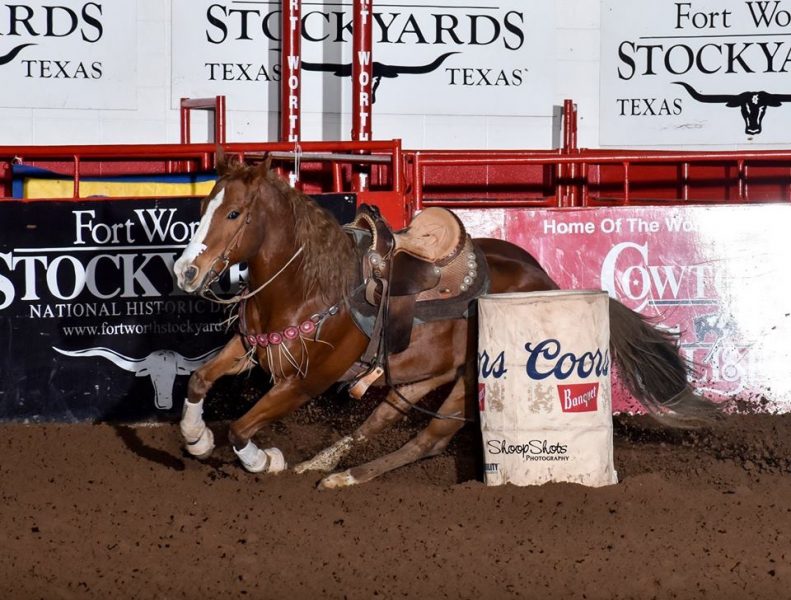 What happened in Fort Worth?

She gets very nervous and anxious waiting to run and hates small crowded warm up pens so I try to stay off of her right up until I run and keep her calm and pet and talk to her. I thought I was being smart and lead her up to the beginning of the alley, but before I could get on she got away from the man helping me and took off into the arena!

As shocked as I was that she ran the pattern, at the same time I am not surprised. She is a very all business type mare when it comes to the barrels, she knows her job and she doesn’t want to be messed with at all or helped. If you try to she gets really mad. She really likes to do things her way and loves to run barrels!!

Was that you at the end of the video? What were you thinking?

Yes that was me, I was shocked she ran that time, regardless if she went on the wrong side of second barrel she was still just high loping around there so I cant believe it. And I asked if I was allowed to run again!

Unfortunately I was a little flustered with everything that had happened, plus she also tried to take off by herself again a second time before I managed to get on her. So I didn’t do her justice when I ran her after that, she is much more ratey with a rider and I wasn’t aggressive enough and tipped barrels so I pulled her up.

She was easy to snag once she got back there, but like I said she was prepared to run out there again by herself if I didn’t get on her in an acceptable time for her!

Was that your first time running in Fort Worth?

I have ran her there a time or two before, she actually placed at the rodeo there before and ran the same time of a 14.3!

What do you think of your mare going viral?

It’s crazy! I can’t even keep up with all the comments! I never thought in a million years that would happen but she deserves it; she is special!

Do you rodeo professionally?

I would love to try to rodeo professionally someday if I have a horse I feel like can take me there. I would also love to train full-time, but for now I work part time as a vet tech, have my real estate license, and do my horses as well. I take a few outside horses and train colts for myself. I am just starting up a little breeding program for myself and I am excited about the phenomenal mares I have to breed, including Dazz!

Tell me about your story with Dazz.

My husband, and I, and two adult children live in Gillette, Wyoming. I raised Think Rich Dazzle. I bred my Time To Think Rich brood mare to Dashing With Cash when Ray and Cheri Wardell owned him. “Dazz” was absolutely stunning from the day she hit the ground, and she knew it! She was so sweet and easy to work with, but was full of fire. Once she knew what you wanted she had it though. She was all business and was always ready to get the job done. Once I learned to just stay out of her way and let her do her job she went straight to top of the 1D. She was so automatic, but I never thought THAT much! We have a small ranch so she got a lot of outside miles moving and sorting cattle. She took that job just as serious as barrel racing.

Her breeding really shows with how athletic she is and how gorgeous she is. Any time I was at the vet clinic and a particular veterinarian saw her he would go get the techs and show them the “poster ” horse for AQHA. Dashing With Cash was an outstanding stallion.

How did you and Lexi get connected?

I sold Dazz to Lexi Doud about seven years ago. The Cruel Girl Classic was going on in Gillette, Wyoming, at that time. It was a great barrel race and drew a lot of entries. Lexi’s dad just happened to be passing threw from Texas and stopped in to watch a little. She really caught his eye. She was sixth that day. The next day Dazz posted the fast time of the weekend out of over 300 entries (over 600 runs). He returned with Lexi a week or so later and the rest is history.

Out of all the horses I have sold, Dazz was the hardest. I thought I could hold it together, but when Lexi put her in the horse trailer the tears just started spilling, I was a little embarrassed. I could not have been happier with the home Dazz got. She has been so well taken care of and it has been so fun watching Lexi. She has done a fantastic job with her. I so appreciate Lexi keeping in contact with me over the years, sending me videos, and giving me updates on Dazz.

What else do you offer in terms of a horse business?

We do have our own stallion who is a grandson of Dashing With Cash and is a Future Fortune Stallion and a 5 State Breeders Futurity Stallion. We breed our own mares and offer outside breeding. We raise and train all of our own horses. My daughter Jessie Fortner is my right hand man when is comes to starting the young ones, and is my best traveling partner to help get the seasoning done. We offer prospects to finished horses for sale.