During my younger years when I was blessed with my baby son, I didn’t let much stand in the way of going on about my business, but a baby does complicate some jobs a bit. I had a front pack for when he was tiny and did quite a bit with him in it, but he soon outgrew it, so I got a backpack.When it warmed up enough to do so, I would put him in my backpack and go do things around the ranch. I was careful to make sure it was warm enough that his little feet and hands wouldn’t get cold, but we went about my business outside pretty regularly. He absolutely loved it too. What a big, new world he was seeing!

If you ever get the chance, pack a good sized infant in a backpack for a few hours. You will appreciate what a horse goes through when you move around on his back. Colin would hook his toes in on the middle of my back and jump up and down in the thing. Then he’d lunge from side to side to see what was going on, especially when he was little enough that seeing over my shoulder wasn’t possible. He’d get excited and bounce up and down like he was on a pogo stick! He would sometimes grab something as we were passing by and about yank me over. It kept me alert.

Carrying a little one in a backpack isn’t for the faint of heart or weak of back. I was strong as an ox then and it would play me out after a long day. I sure didn’t have to do planks or anything to keep that core body strength up either. But, it gave both of us mobility to go about my work. I even vacuumed with him in it. For some reason, the vacuum scared him spit-less when he was not on my back. He’d strain to watch over my shoulder while I vacuumed but never made a peep. I guess he thought I would protect him from that noisy thing. 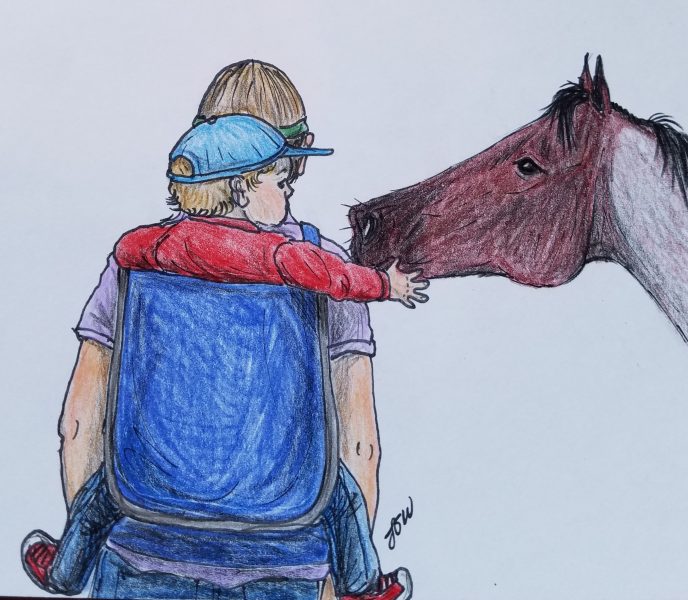 I had a colt I was fooling with at that time. I’d have him on my back when I went to catch her. The horses were all very interested in that thing on my back and would come and inspect him, which he thought was great. He’d giggle while they breathed on him and tickled him with their whiskers. The colt was a sweet mare that loved baby everything, so she would walk by me close enough that he could poke her eye and touch her face as I led her in.

When I got her brushed off and ready to saddle, I’d step through the gate and hang his backpack, with him in it, securely on the fence, buckling it to the pipe of the adjoining corral fence. He could see me working in the other corral and would kick and chatter to himself and me while I got her saddled and then worked her in that corral. When I was on her, I’d ride her over by the fence and reach over and touch his hands. She got to where she could side pass right over to the fence, hence made opening gates a breeze. I could ride her out of that corral and up and around the big lots above the barn and still see him in his backpack grandstand seat. I got a lot done with her while he watched. I don’t remember him ever getting impatient or fussing about being there. He could watch the barn cats coming and going, see me riding my colt, and look around, so he was pretty well entertained.

It was quite a change when he no longer fit in the backpack and was able to travel under his own steam. He about scared me to death many times as he was faster than he looked and was magnetically attracted to horses. It was easier when he fit in the backpack, but he was too heavy to pack around by then. My back and shoulders were just played out. I was sure I’d have white spots on my “withers” from that backpack before he became mobile.

That backpack was a great thing for both of us and it showed me just how much every muscle twitch I made on a horse could be felt and affect the horse’s movement. Good lesson in horsemanship and it got my boy addicted to horse hair at an early age in the process. What a winning combination!