I’m not one of those who pushes the use of a helmet. In fact, I don’t wear one when I head out a-horseback. When my two-year-old rides though, he does, but he won’t forever.

It is a fairly common occurrence on the ranch for youngsters to ride while still in diapers. At two-and-a-half, my son Brindle shows a great interest in riding, which, at this time, involves being led around on the most broke, quiet steed in our string. He hangs onto the nightlatch or horn and is beginning to man the reins, but he is never placed in the middle of a horse unless his “hat” is strapped on tight. 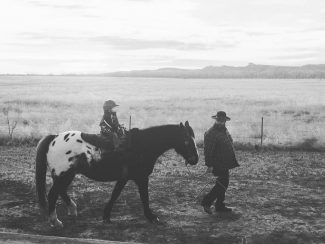 When my sweet little boy was first placed in the middle of my old, gradually-blinding bay horse, and led in a circle at the speed of an aged turtle, in a secure pen barely big enough to trot in, I clung to his leg like he was on the baddest bucking bronc for one simple reason: he just learned to walk a mere year ago! My nice old Tuff just meandered around with Brindle’s daddy at the head and mama by their side, but one shake would topple this baby off his horse.

As a toddler, he’s just too young to have his bare blond head bobbing along even at the slowest of walks. Brindle is lacking the core strength and complete balance to stay in the middle and his feet don’t reach the stirrups. If my horse were to get bit by a fly and take a big jump, my boy would be in the dirt. The rocky dirt. I would be bereft if something happened while he was on my trusty rusty ol’ bay and worse yet if I was the person leading him.

I have several good friends who are talented horsemen and have had concussions from horse wrecks, many of which involved an ill-placed rock. Their misfortune was a bargaining chip with my husband.

I take comfort in my husband now being as adamant about Brindle wearing his helmet as I am. There are instances where Brindle begs to ride with daddy at the ranch rodeo, and in these instances, we just aren’t packing around the helmet. It’s not practical. Whenever we ride at home, however, the helmet is donned.

Brindle won’t wear it forever; in fact, we will probably allow him to ditch it sooner than he really should, and when it comes time for Brindle’s baby brother Roan to straddle the saddle, he will strap on a brain bucket. When they get their balance about them and legs long enough to put forth a good effort in clinging, the helmet will start to be used less and less.

They will probably complain and gripe that it’s not cool and cowboys don’t do that, but my pint-sized buckaroos do. For now anyway.