A special “Baby” is at the Wrangler National Finals Rodeo these next days.

It’s not any baby, but a steer wrestling horse, Babysgonecountry, whose barn name is Baby.

Ridden by Jacob Talley, the number two steer wrestler in the world, the ten-year-old burst onto the rodeo scene in 2019.

Owned by Sam Dixon, she was pro rodeoed on a little in 2018. But in 2019, Justin Shaffer, Will Lummus and Cody Harmon rode her, winning quite a bit of money, Dixon said.  “and people started asking where she came from.”

When Jacob Talley came back from a torn pectoral in mid-2019, he got on her, and Baby continued to do well for her riders.

It was at the 2019 WNFR that she started to really shine. Lummus wanted to make a horse change, so he got on Baby for the eighth round. The steer wrestlers had taken her to Las Vegas with them as a backup horse, but weren’t sure she was ready for the big stage.

She was. Lummus won round eight and placed in the tenth round on the horse.

Baby is special, but she’s not easy, Talley said. She isn’t friendly and doesn’t like to be hauled.

“She doesn’t like being in the trailer,” he said. “She wants to shake the trailer back and forth and rub on the walls. She can be a basket case sometimes.”

Baby will also nip at Talley when he puts on the saddle. She’s never bitten, but she gets close to it.

Baby gives her all for her job, however. “She is so gritty,” Dixon said. “She fits any situation you’re in, whether it’s a long score running them down like at Salinas (Calif.) or Cheyenne (Frontier Days). Everybody likes her in the short scores, too, because she’s so quick off your hand.” 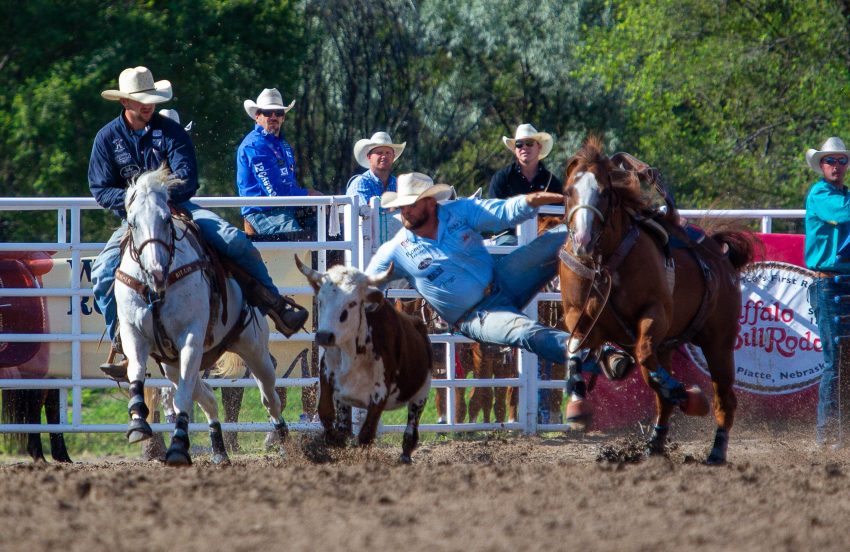 Jacob Talley on Baby at the North Platte, Neb., rodeo, where he tied for fifth place. Photo courtesy Don Christner.

Talley, the number two man in the steer wrestling race, gets along with her, though. “We ended up really clicking.”

Baby, who came off the race track, loves to run and hates to lose. After the steer wrestler gets onto the steer, she wants to race.

“She’ll put her ears back and it’s like a race to the back end,” Dixon said. “It’s pretty fun to watch.”

Talley said she hates to lose. “It doesn’t matter what horse you haze on, she’s going to try and race it. She doesn’t like to be beat, at all, not at all.”

Baby’s crew wasn’t the only believer in the horse. Last year, prior to the WNFR, world champion steer wrestler Tyler Waguespack had told Dixon that Baby should be there. After Lummus won a round on her and placed in a second round, Waguespack told Dixon, “I told you she would do that here.”

Talley, from Keatchie, La., will be the only bulldogger on Baby at this year’s WNFR. His hazer will be Justin Shaffer.