Back in the days of running a small broodmare band and standing two stallions, I was always interested in older mares with the old time pedigrees and characteristics to add to the band. Even with the extra work and maintenance old mares took, they were nearly always worth the extra effort. I had been taught by one of the finest horse vets I ever knew and could do caslicks, uterine flushes, and other procedures that were often necessary to keep these old queens in production to get a few more foals.

I was browsing through a horse sale catalog and stumbled onto an old mare with a very desirable pedigree. She was 22 years old, as I recall, and had not only raised a foal that year but was bred back. But, they were a big, grass and cake outfit and this old mare was finding it hard to live like that. Ours ran very close up and those old mares got babied so they could continue to do the job they were good at at our place. So, we loaded up and drove to Nebraska to take a look at her on sale day.

My expectation of an old relic of a mare wasn’t completely wrong. She was in good condition for her age, though frosty in the face and nursed down a bit from the big, fat weanling at her side. The scars on her would suggest that she was in an accident that virtually split her in half at the sternum, scarred her legs horribly and had nearly cut one front hoof off. It hadn’t been cared in years and the hoof was a mangled, twisted mess of scars and abnormal growth. She favored that front foot, as to be expected, but got around well enough to be hard to catch in the pen. She had a gorgeous filly at her side that showed what she could raise. I was smitten by the suspicious old mare.

I bought her and we brought her home and we hung the name Annie on her. Her shiny black hide soon smoothed out over muscle and fat without the pull of a foal nursing. Once she was located and had quit fretting over the weanling, it was time to turn her out to enjoy some green fall grass and get acquainted with the band of mares.

They didn’t exactly give her a warm welcome, as they all had to take a bite out of her somewhere, but she was wise to being out with mare bands and getting used to new horses, and just hung off by herself. This wasn’t her first change of address, as her papers showed several transfers over her lifetime.

The boss mare in the band was Cody. She was a stout, powerhouse of a mare and had been a standout saddle horse before getting promoted to broodmare in her later years. She didn’t pay much attention to Annie, just showed her subtly who was in charge.

The mares watered in the corral, so each day they would come to water a few at a time. Annie didn’t move very fast, so she would wait until most had come and gone before making her slow way that direction on her crippled feet.

We had laid in a new underground line to the barn and that trench went through the gate that led to the waterer. It had been packed and tromped and hadn’t been a problem. However, we had had some rain and unbeknownst to me or anyone else, had some soft spots develop.

Annie was shuffling her way in for a drink and Cody, who had passed her, was standing in the gate before proceeding to the water. Annie cautiously started to walk past Cody to go into the corral. Just as she got next to Cody, her hind leg fell through into that trench, going in above her hock. Annie started to fall, for with her crippled legs and feet, she couldn’t lunge out of it. Just as suddenly, Cody sidestepped over toward Annie and squatting a bit, shoved her big old hindquarter against Annie, stopping the inevitable fall that could have broken Annie’s hind leg. Leaning against Cody’s solid 1300 pounds gave Annie the chance to balance herself and get her leg drawn up out of the trench. She stood there, breathing hard, then she and Cody both walked on into the pen, side by side.

I marveled at what I’d seen as I retamped the trench, as it was such an amazing occurrence. No accident either, as Cody’s reaction to Annie’s need was so quick and deliberate. Dumb animals indeed. 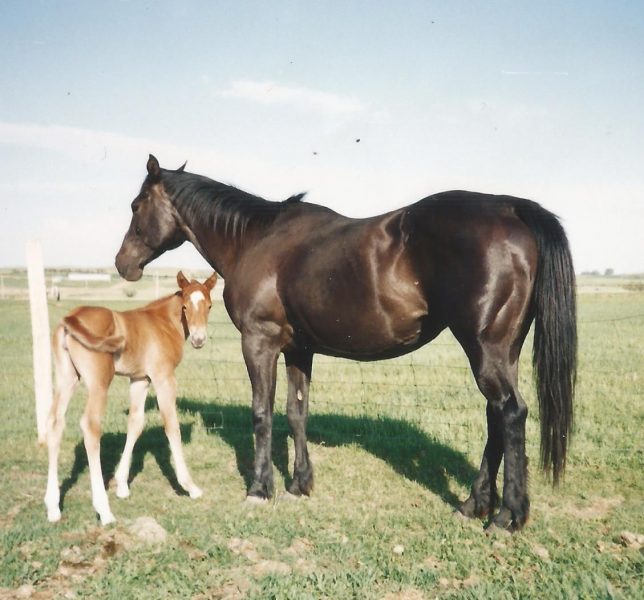 Annie and the foal she was carrying when Cody saved her.