And The Race Is On! 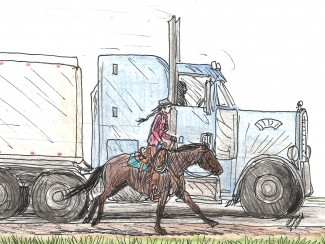 Getting ahead of the cows meant running side by side with the traffic.

Years ago I got a call to help move some pairs to summer pasture. I had never done any day work for the outfit, but agreed to come and bring my then nine year old son and arrive just a little before dark thirty.

We got to the place and headed out to gather the pairs. Most of the calves and some of the cows were still on bed ground, but rather than let them get up and get nursed the owner wanted to get right to it so we gathered them too fast and pushed them onto the county road. Once onto the road, despite many calves already turning back to look for breakfast, he insisted we hurry them along. I could see a disaster in the making, but had agreed to work the day so gritted my teeth and kept going.

This bunch of cows were taken 14 miles to summer pasture every year. They were a mixed bunch of cows with mostly baldies and Angus, plus about 30 head of longhorn cows who got right out on the lead to go to green grass. Most of the cows forgot they had a calf at this point.

By the time we hit the highway I knew we were in a first class wreck. No one flagged on either end, no one got in the lead to hold them up, and the half dozen or so kids besides my own commenced to racing their horses up and down the road ditches or riding right down the center line of the highway. The few adults on the drag consisted of two certified trail riders and one very drunk old cowboy. My son was doing the work of a dozen hands on the drags and I was just trying to keep the cows and kids off the pavement and keep them from getting killed. The calves were fighting to turn back every step.

I was riding a dink mare who was all looks and no heart. Her brakes were set from day one and she had pouted every mile I spurred out of her in her six years. I was usually in the proper mood to deal with a gunsel deal like I was in when riding her, so couldn’t have asked for a better mount.

Part of the hangup was the owner insisting that we trail the cows down the very narrow, steep west side ditch instead of moving them across to the much wider east side ditch, so the cows kept scrambling up onto the highway. The owner and several of the other guys that looked like cowboys finally got in a pickup and trailer and left to go do something else. The highway was through a series of hills and when I topped out and saw how far the lead was from the drags I knew I had to get ahead of them and hold them up now that the owner was out of sight.

I put my big, stout, sullen mare up on the shoulder of the northbound lane of the highway and hit a high lope. I had gone a little ways when the road ditch dropped nearly straight off for half mile or so. We were cruising down this narrow shoulder at just short of a run when I heard a truck coming from behind. That semi went by like a freight train, not three feet away, and nearly blew us off the shoulder but we kept pounding it north. Several other vehicles and trucks did the same but we kept at it until we got ahead of the cows who were at a long trot and at least a mile ahead of the drags.

When I got ahead of them I crossed over and for 10-15 minutes my horse and I fought them back until they finally milled by the fence. I was able to see for a long way to the north and stayed out on the southbound lane to be very visible to the cows and to see the drags catch up. I was sitting there with my big mare heaving for breath when I noticed something seeping down the highway from underneath us. I peered under my horse to see if she’d broken a radiator hose or something and watched the sweat running down over all four feet.

When the calves finally caught up, my son was pretty hot and his old mare was dripping sweat too, but he and the old drunk had kept them all in the bunch and got them back with the leaders. Since the owner was still gone, I turned the cows across the highway and into the wide east ditch which had flattened out, got in the lead and did it right at last. We finished up the 14 mile trek without too much more trouble and I turned them into the gate and took a tally with the tiredest bunch of little calves I’ve ever seen stumbling after the cows.

The owner showed up about then and wanted to just shut the gate and leave them. I gave him a withering look and said that a cowman always pairs them up before leaving them and that I was, by God, not going to leave them until they were. My son, the old drunk and I held them around a dam and let them pair up while the rest of the crew went back for the trailers to haul us all back to his place.

Needless to say, we never went back to participate in that fiasco again