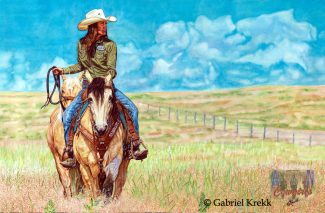 American Cowgirl Project, Created by Artist Gabriel Krekk
For many, there is nothing more intriguing, invigorating, and iconic than the American Cowgirl. The image of the American Cowgirl has won over hearts worldwide when she has graced silver screens and been in books, and magazines alike. In real life, you might have caught a glimpse of her driving her truck and trailer down the highway or at a rodeo, but most of the time she is elusive while working out in the hills. Her heart is with her animals and she prefers to be with them. The American Cowgirl has worked through the pain and bad weather. She has learned to endure and make the most of what she has. She can adapt to any changing and challenging situations with ease and composure. Like a wild flower, she blooms in spite of adversity. She is great at improvising and a jack-of-all-trades. However, when you meet her, you will see her softness, her poise, and elegance. Just because she can ride, rope, and work alongside the men, doesn’t mean that she isn’t the most graceful woman you might ever meet. These characteristics are what has inspired renowned photographer and water color artist, Gabriel Krekk, on his journey to capture the essence of the American Cowgirl. This project is a great representation of both Gabriel Krekk’s mastery of his craft and the significance and quintessential characteristics of the American Cowgirl.

Humble Beginnings
Born in Nyirbator, Hungary in 1955, Gabriel Krekk, and his family escaped the Hungarian/Russian Revolution in 1956. After spending over two years in refugee camps in Austria, the family was accepted by Canada to begin their new life. In the late fall of 1958, the Krekk’s would begin their journey in Canada arriving in Halifax, Nova Scotia and moving on to Havelock, New Brunswick. The family endured many hardships integrating into their new homeland. In the fall of 1959, the Krekk’s made their last family move to Belleville, Ontario which became home to Gabriel Krekk for most of his life. Gabriel has since moved to Maricopa, Arizona where he feels his art is at home in the western lifestyle of the American Southwest. 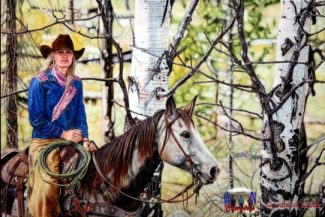 The Artistic Journey
It was clear from an early age that Gabriel Krekk had a keen aesthetic sense and talented hands to create beautiful art. Gabriel has grown, evolved, and developed his art through the years. He has dabbled with many mediums of art such as oils, pen and ink, as well as tempera, and then finding his passion in the world of water colors. Unlike, typical water color art that is soft and simple; Gabriel Krekk’s water color paintings are dramatic and detailed. The paintings are so in-depth and comprehensive that they look like a rich colored photograph.
Gabriel Krekk was one of the founding member of Canadian group of artists called, The Group of Twelve. As described on their website, “The Group of Twelve is a collaborative effort by a dozen Professional Artists who have taken their work deep into the realms of Contemporary Realism. Each of these Artists have individually succeeded in their own careers on a national and even international level and through a synergistic approach they have dedicated themselves in membership to bring Contemporary Realism to a level of recognition unsurpassed in the modern day Art world.”

The Group of Twelve had major coverage across Ontario. Gabriel Krekk has had successful art exhibitions in galleries across the US and Canada in cities such as Los Angeles, New York, Frankfort, Indiana, and his home town of Belleville, Ontario. The largest art gallery in South Eastern Ontario, The John Parrot Gallery, once asked Gabriel to do live painting sessions where spectators could ask questions and engage in conversation with Gabriel while he painted. Having never done live painting sessions before, this is a fun memory for Gabriel to look back on. Another fond recollection is when Gabriel was asked to be part of the Illumination Project at the Yawkey Center For Cancer Care in Boston, Massachusetts. The Illumination Project was to display art, not to sell, but to inspire cancer patients and family to feel better. Gabriel was so moved by the project that he hand delivered the paintings himself.


However, it wasn’t until a gallery curator in Chicago explained to him that she loved the way he styled water colors, but that his art was too varied in subject matter and that he was lacking a signature style that would help people recognize his work no matter where they saw it. At the time, Gabriel had amazing paintings but they were of animals, buildings, people, etc. The subject matters were not related to each other in any way. This was a big revelation and a tough pill to swallow. It took several months for Gabriel to come to realize the truth of the matter. This constructive criticism created a turning point, a shift in perspective of Gabriel’s focus on his art. This was the beginning of a whole new outlook on art and life for Gabriel Krekk.
In 2008, Gabriel Krekk went on a road trip to Hardin, Montana to do a photoshoot of Custer’s Last Stand Reenactment. Little did he know this would be the beginning of a major shift in his work. He would soon find his new muse, The American West. Gabriel created five paintings from that photoshoot; one named Outside The Walls, sold before it was even finished! Others included Charge Across The Cheyenne, Sitting Bull, and Blue Coats of Benteen. 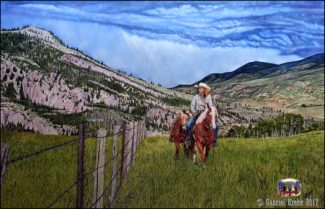 Finding The American Cowgirl
The breadth and depth encompassed and shown in Gabriel Krekk’s American Cowgirl project is unparalleled. The hours, days, months, and now five years put into this project, plus still at least two more years to go; show true dedication and passion felt by Gabriel Krekk for his mission to encompass, embrace, and encourage the American Cowgirl and all that she stands for.
However, you would have never known that this project was all brought about by a chance encounter meeting of American Cowgirl #1 and then again with American Cowgirl #2. Some might call it destiny, but others involved know it was made to be by Gabriel’s faith, good nature, keen sense, and will to do something great with his God given talent.
First the cowgirls must be nominated through the website, gabrielkrekk-americancowgirls.com. Then after the submission is received the candidate is reviewed by a scoring process. Then, the highest scores are interviewed.
To begin the process a multi day photoshoot is scheduled. After capturing literally thousands of photos Gabe narrows it down to several of his favorites for a special video tribute to cowgirl. Gabe then selects one special photo for the painting. Hundreds of hours go into the extremely detailed water color painting. For Gabe, this is a labor of love and the art flows from his soul. 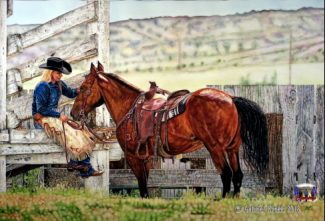 Creating More Than Art – Creating Connections
One of the most well known names among The American Cowgirl project is American Cowgirl #13, Amberley Snyder. When Amberley asked Gabe to illustrate her book and if it could be done in time for Christmas orders, Gabe knew he had to get it done for her. The time crunch was stressful but they accomplished the feat and had the book out before the deadline. This is just one example showing how Gabriel Krekk will do anything he can to help his cowgirls out. They are all like family now and the friendships formed will be sincerely treasured by all involved. The art will live on and be a representation not only of the iconic American Cowgirl, but also the bonds created through the project.
They say your life is the sum of your experiences and Gabriel Krekk’s American Cowgirl Project is an amazing experience in itself. I hope you get to see the collection in person at one of the galleries scheduled to showcase it. 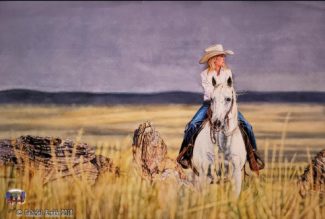 Gabe goes above and beyond for the American Cowgirls featured in his project… not only do they get the photoshoot, a copy of the painting of them, but Gabe also puts together amazing YouTube videos of their photoshoots and time spent together. I added a couple just for fun! Enjoy!