All Horse but No Kid Horse 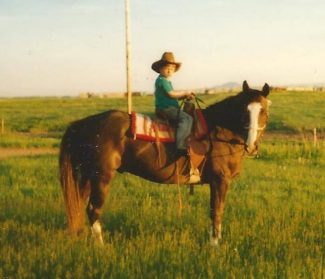 The grand old gelding who had packed my son Colin for thousands of miles had died the winter before. We really needed to replace the old horse, and Colin, at four, wasn’t quite ready to take on just any horse on the place. Most of our horses were pretty hair triggered and would never be a kid horse.

We were dayworking steady and on the day in question, needed to gather a big bunch of cow/calf pairs to ship home to fall pasture.

My old Kelly horse was 23 and really liked Colin. He was gentle and trustworthy on the ground and sought out Colin’s company when allowed to. My concern with Kelly, though, was that he was all business when someone was on him and would do what needed to be done to solve a problem or handle a bunch of cattle in the best way he saw to do it, sometimes without authorization.

I finally decided to have Colin ride Kelly and I’d just lead him. Seemed like a great plan. We unloaded horses and set gates at a set of pens on the east side of a busy highway. We had to gather the cattle on the west side and cross the highway to pen them. When we crossed the road to get started, we shut the gate into the pasture so that we could control the bunch for the highway crossing.

Kelly led right along with his little cowboy. I had occasionally led him on him the summer before when Colin was a mere three year old and his old horse, age 28, needed a break. So, all was fine. We had gotten most of the cows gathered and Kelly and Colin were getting along great, so I had finally turned them loose on the drags of the bunch. Other riders were not far off, so several of us headed out around a deep gully to bring some cows around that were to the south of it. I kept looking back, uneasy at leaving my boy behind but Kelly was pushing the drags just fine and handling well for Colin.

The gully was very deep, straight sided and maybe a quarter mile long and not even the dogs could cross it. Just as we had the cows gathered and were headed back around the head of it, I saw the main bunch break for the gate as they knew they were going home to fresh pasture. When they did, though, they swung to the north and suddenly, my little boy and hot old horse were on the front end of the bunch! Kelly saw them break and he left to head them, not thinking about taking it slow and easy for his little partner.

I was on the far side of the uncrossable gully, his Dad wasn’t close enough to catch Kelly, and the race was on between Kelly and the cows. My heart was in my throat as this wasn’t just a case of heading the cows and stopping them, but it was going to be right at that wire gate when it happened.

Kelly bellied out running, my son looking tinier with every stride, and headed the cows just yards from the gate. Fortunately Colin never made a sound as we all watched helplessly.

Instead of the hard stop and turn I’d expected and feared, Kelly throttled down, and eased to a stop, facing the lead cows right by the gate. The owner of the cows sent me on around the head of the gully and the bunch to retrieve my horse and boy before my heart exploded or the cows decided to leave again.

I rode up, talking to Kelly, grabbed the lead rope and finally took a full breath. Colin’s eyes were huge. Kelly was nervously looking back at his rider, I think realizing that he had done something he shouldn’t have but not sure what. I stepped off and opened the gate, then we rode on across the road to guide the cows through the far gate. The cows crossed easily and we soon had them penned.

Colin hadn’t said anything other than saying he was fine when I asked. I got off and tied our horses to the trailer and looked up at Colin. I asked him if that had scared him. He said it had a little. But, his next words gave me a glimpse into the future. “But it was really fun Mom,” he said with a big grin and sparkling eyes.

Kelly sure hadn’t been in the wrong, he’d just done the job he saw needed doing. Colin hadn’t done anything wrong either. I never paired them together again as I had determined that Kelly wasn’t a kid horse and, though he still liked him on the ground, he was ever after nervous and would break out in a sweat if Colin rode him, even in the corrals.