Back in the very early 80s I was working for an old couple one spring calving cows and heifers. It was a cold, dry spring, and I don’t recall that it rained one time while I was there through calving and branding season. But it was cold and the wind blew most of the time, as it will during a drought.

I had the mature cow pairs in a big, rough pasture and I rode through those pairs as often as I could to check them and to doctor dust pneumonia calves. Bordering this big pasture was that of a neighbor’s who was calving cows there.

He had a couple of young guys working for him who checked those cows and tagged calves every day. They did their “cowboying” in a pickup for the most part. I liked the two guys as they were always laughing and giving me static. They were good neighbors.

One morning I was making my rounds and was checking the north side of my pasture, which was the border fence for the neighbor. The wind was blowing hard but occasionally I thought I heard a shout on the wind. I rode up on the highest point I could and looked down into the pasture. I could see the pickup my two friends always drove. It was down off the ridge nearly a quarter mile away. It looked odd though and I finally concluded that there were people on the top of the cab.

I just had to investigate this odd deal, so I loped to a gate and headed down toward the pickup. As I got closer, sure enough, it was people on the top of the pickup cab. On the ground below, staring menacingly up at them, was a short, stout Angus cow. You remember the type: not tall but wide, pin ears and eyes on the front of her head. Great little cows but very protective of their calves. This one was streaming slobbers from her mouth and bellering at them in a most unfriendly way. She was upset.

They explained that they had gotten out to tag her calf. One was to tag, the other to bait the cow away enough so he could. Well, she was quick and intent and the baiting worked really well, but somehow, the tagger had not accomplished his job. They jumped into the pickup bed through the gap where the tailgate should have been and she got right up in there with them. They ended up on the hood while she baled out over the side to check her calf. Her calf, in all the excitement, had crawled under the pickup and laid down just about dead center under the cab. Every time one of them tried to climb down to get in the pickup she would race around and send him back up and slam the door firmly with her head. So they were treed on top of the cab.

It was a cool spring day, as I mentioned before, and the wind was keen. These two guys were riding around in the cab of a cozy pickup, heater and radio both on, probably sipping coffee from their thermos when they stopped to tag the calf. Their coats were inside the pickup. I sat off a ways and listened to their tale of woe while the cow shark kept circling the pickup. I was comfortable enough with my coat and leggings on so it wasn’t bad at all. They became absolutely whiney about being cold. 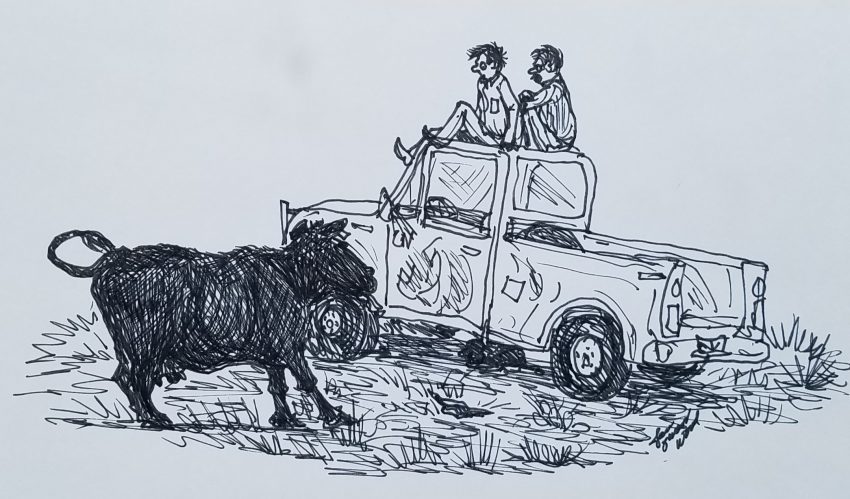 I was kind of embarrassed for them with all the whining, so was about ready to ride away, but they started begging and pleading with me to drive that angus cow off so they could get in the pickup. That is, if they could. The doors had been pounded pretty hard by that sweet little cow and there was a possibility they wouldn’t open. They promised me all sorts of rewards, then they threatened briefly. I turned my horse to ride off and the begging and promises resumed, after apologies for threats.

My concern for the calf going without the nourishment and love that his mother had to offer finally made me decide to help the little group out. I cut the cow away and, surprisingly, she didn’t fight my horse too bad while I drove her a ways off. It didn’t take those guys long to get off the cab! One reached under and grabbed the calf, dragged it out and tagged it while the other got one door yanked open that still was operational and slid across the seat. I let the cow by me when I saw the calf was tagged and she was off like a rocket to try to scorch the back pockets of the tagger. He got in and got the door shut just as she arrived.

In all the excitement of getting inside the pickup, neither had thought to grab their hat and cap off the ground. They had thrown them at her while treed. She had mashed and slobbered on both. I drove the cow and her calf away so they could get their headgear. They did sort of thank me but sure gave me a hard time about taking so long to help them. I don’t remember now if they ever lived up to the promises they made me that day either.