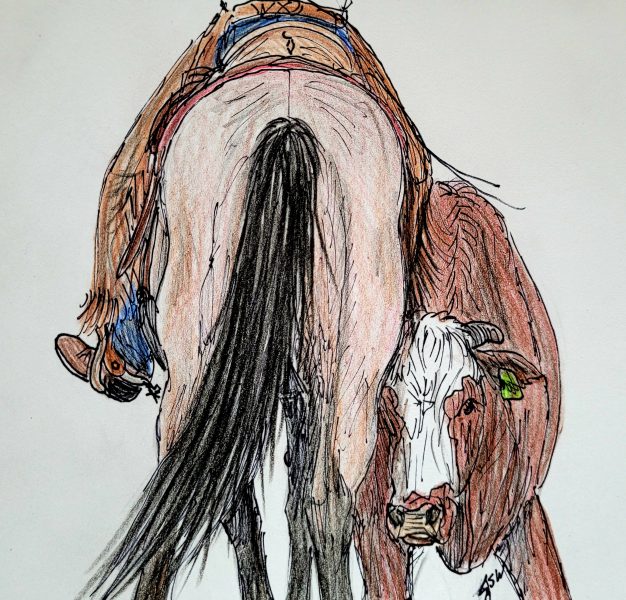 My right knee just isn’t what it was when originally issued. It’s had plenty of wear and tear over the years as most knees have. But, some incidents come to mind that really put the kibosh on the overall knee function and longevity. One particular one involved a crowding pen and an unaggressive cow.

Fall day work was going seven days a week and on this day, the ranch was pregnancy checking cows. I was, as usual, working the crowding pen and alley on the best crowding pen horse I ever rode, Lily. Cool, calm and collected, no situation ever made her turn a hair and she handled all crisis with self preservation. Most importantly, she always stayed on her feet.

The cows were working fairly well, considering they were a notoriously hard bunch to get gathered out of the rugged country they spent the fall in. There were a few snorty cows, but most were just wily and a little pushy.

I was bringing six or seven head up from the alley into the crowding pen each time, as that’s what would fit in the lead up to the chute. It was going like clockwork. But, in this particular group was a chubby red brockle faced cow with scur horns. Her little horns weren’t big, and only the right one actually stuck out. It was C shaped and about five inches long. There was plenty of room in the alley but Ol’ Red decided to back out. No one was piping them at the back, as I was using Lily’s chest to block the alley. So, the cow pushed like a dozer and finally got enough room to turn around. As she did, she pushed past Lily’s right shoulder head first in the narrow part of the crowding pen. She started by me and in doing so, caught that C shaped horn in my oxbow stirrup. In one sudden motion, her head was jerked to the right and her momentum caused her to follow her nose and go under Lily’s flank and out between her hind legs. All would have been fine, but, my foot was still in that stirrup and it twisted my knee halfway around with the weight of the cow behind it. I was able to move Lily after her to get loose, but not before the damage was done.

My knee hadn’t ever swivelled. Not normally. It did after that day. Oh man it hurt. I’m sure it tore half the alphabet of ligaments that are available to orthopedic doctors. I lifted it out of the stirrup with my hand and let it hang until I quit sweating and using bad words. Feeling my pulse in my knee, I put the cow back in the alley and finished the day without getting off of my horse until I got next to the trailer where I could hop and hang on to something. My knee was as big around as a cantaloupe by day’s end, fairly straining the seams in my pant leg.

I never knew what happened inside that knee. I had the trifecta of no money, a job to do, and commitments to fulfill, so I never went to the doctor. I limped for a couple of months, but still kept working horseback through the fall season. Once on my horse, it wasn’t so bad. Getting on was a little challenging as I had to stand on it for a moment while I got my left foot in the stirrup. I couldn’t get on the off side as my knee couldn’t bend enough to put the right foot in the stirrup. But, I managed to get on, just never got off without a really good reason. The swelling supported the healing for about three months, so that was handy. Kept me from overusing it.

It gradually regained most of it’s function over the next year or so. It’s never been 100%, but then, that’s not the last time it fell victim to cow abuse. Now it seems to have a target painted on it as everything happens to that knee! It was after the scur horn incident that my oldest brother kindly pointed out that I was aging in dog years. Hmph…I didn’t bite him but I growled a little.