I talked some about the three buttons on a horse’s side that helps a horse figure out exactly what you’re after. Once you have a horse feeling and responding to each of the three cues separately, you can combine them with another leg cue and your reins to get your horse to do some more advanced maneuvers. While there are many things you can work on, I’ve shown you a few common advanced maneuvers to try out below. 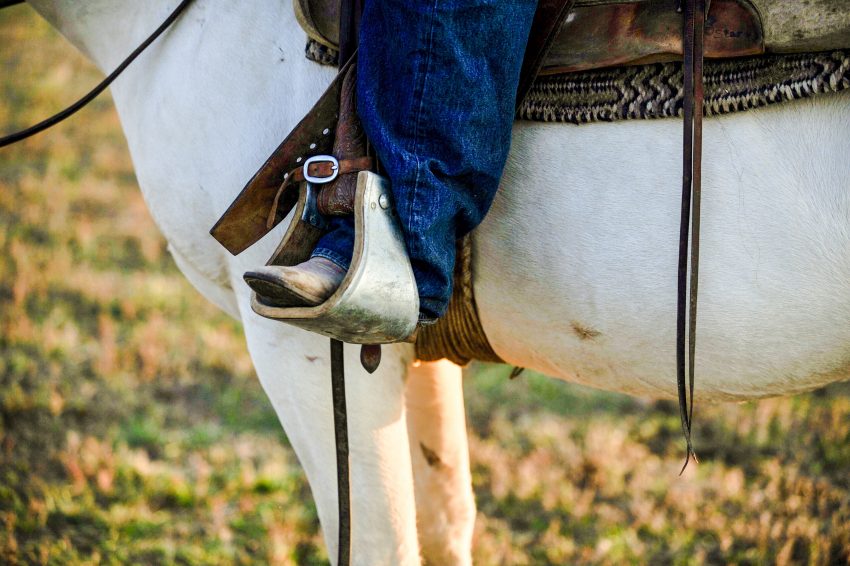 Button one, behind the cinch, moves your horse’s shoulders and front end. 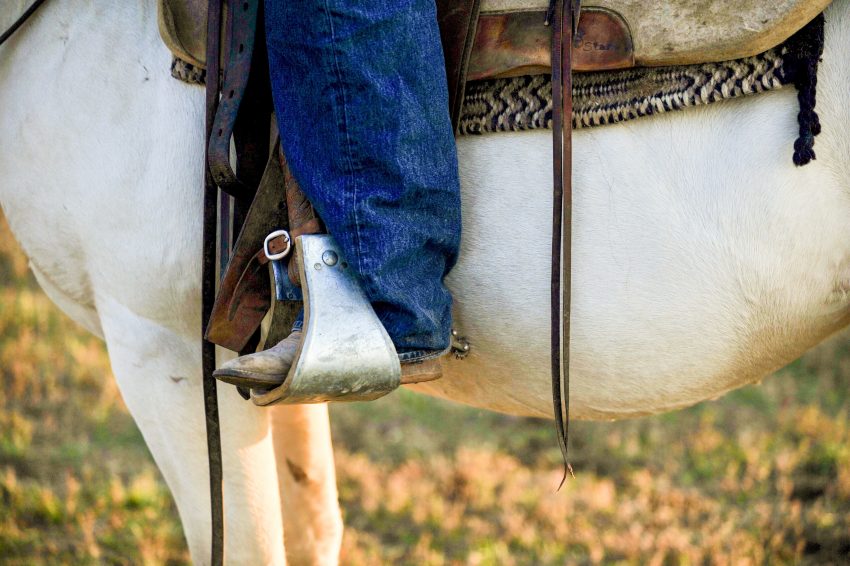 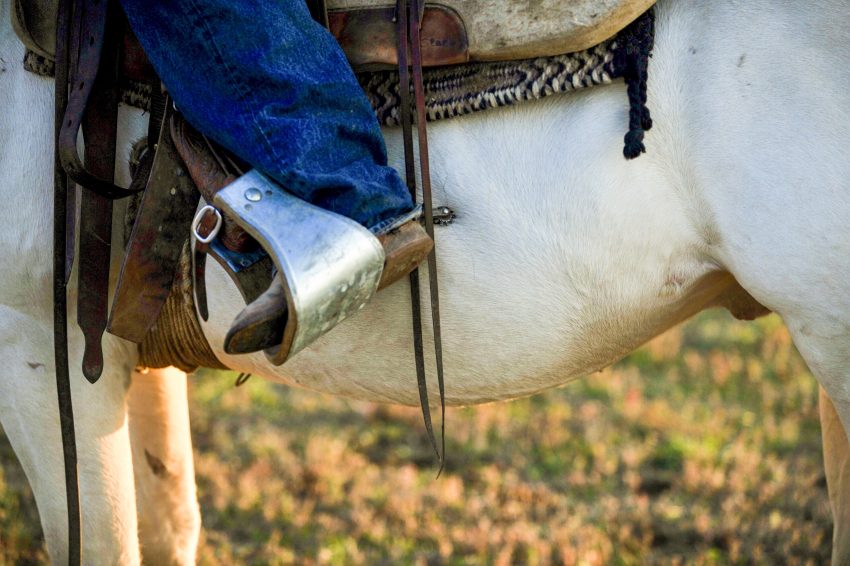 Button three, about where your back cinch lays, moves the hind end.

Lope Departure: Once you have button three working really nice for you and your horse, you can combine two buttons to get a nice lope departure in the correct lead. To do this, I ask my horse to gather up his hind end and bring it toward the center by using my outside leg on button three. Then, once I have his hind end in, I press my inside leg to button one to ask him to kick up into the lope.

It’s how I have always asked for the lope, because I don’t want my horse to kick into a lope every time I press that outside leg on. Sometimes I want him to just bring his hip in, so combining the two buttons makes for one consistent cue, and I very rarely get the wrong lead on my horses that know this well.

Balanced Circles: If you have a horse that drifts in or out on a circle, setting your hands in a loose-but-consistent position at a walk, you can use your leg cues to compensate and keep them in the middle. If your horse is cutting in, use button one on the inside to lift that shoulder up and push it back out. Once your horse is in the right position, let him go. Allowing them to make mistakes and correct them lets them learn. Always holding them in place makes for a horse that can’t stand on his own if you take cues away, which is not what we’re after.

If your horse makes a square instead of a circle, round your horse out with some help from button two on the inside. Don’t press, but bump your horse’s rib cage into a round position, and support that roundness with your reins. Don’t keep your leg there all the time. Encourage your horse to find the right spot, then reward them by letting them be, then correct it again when it occurs.

If your horse pushes out of your circle, recognize if they’re shoving out through the shoulder, rib, or hind end, then apply the appropriate button to keep them in. Once again, once you’ve corrected it, let them be. Often they drift out in one particular area of the circle, toward a gate or other horse. Be ready and ask early if your horse does it repeatedly, laying on a little heat if your horse ignores your asking multiple times.

Spinning: Some folks use a different button for spinning. Many people apply pressure on button one on the outside to get a horse to spin, but the thought is that pressing there can actually get the opposite effect, your horse moves its shoulder away from the spur, but the face yields the opposite way (to the outside), making room for the shoulder to move. 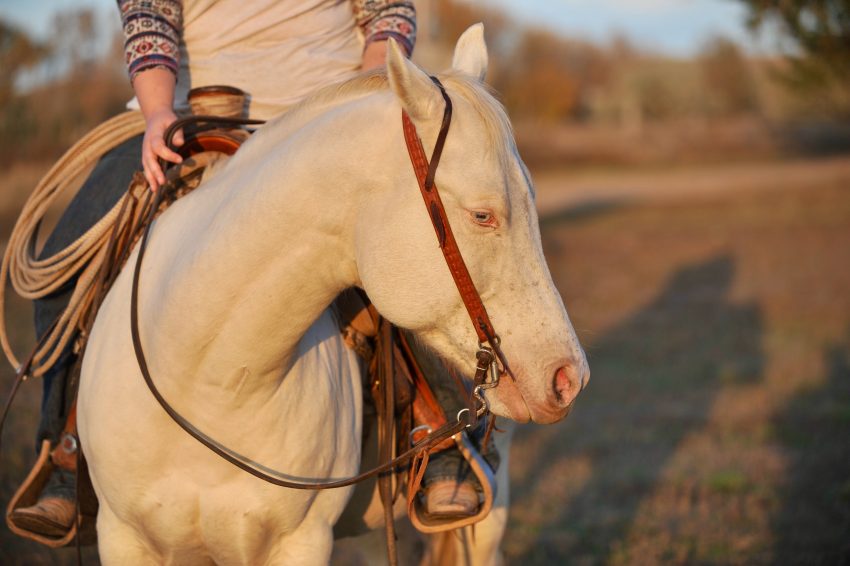 Using the middle button, button two, very lightly on the inside, you can talk your horse into looking “in”. This is handy when wanting to prepare your horse to go in a particular direction, such as a spin. (The horse pictured is bent too much to spin nicely, but it shows what looking in can look like.)

To remedy this, get your horse’s nose to look toward the direction of the spin by applying reins or by gently tickling button two on the inside (this one takes some practice!) then sliding the outside leg back to button three. The thought is that the horse’s hip must stay planted when spinning and that outside leg scootched back holds it in place, then the reins do the work to spin him around. I tend to use button one to spin, but apply button three if and when the hip needs to be addressed while spinning.

Moving Laterally: Combining the use of reins and forward movement can yield (heh heh) some really nice, dressage-type maneuvers. Asking your horse to move his hind end or shoulders over or in while moving forward can be the start of lead changes and more advanced lateral maneuvers. I won’t go into details, but start by gathering your horse up and asking him to shift the hind end in, just a step or two, with button three on the outside, then drop the cues and offer relief when he gets it. Do the same with the front end. Ask him to gather up and move the shoulders over with button one on the inside to move the shoulders cleanly foward and over a step or two, then offer relief. 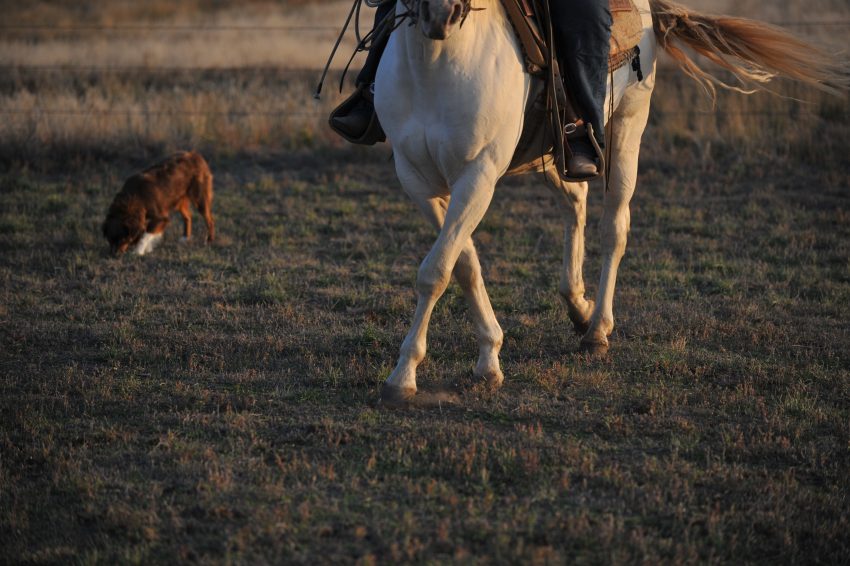 Notice the DOOR is OPEN! My right foot is off this horse’s side as I ask him to move his shoulders over with my left (inside) leg on button one. His nose is slightly to the inside, making room for his shoulder. As we advance more, we’ll straighten and gather more. You can tell he is moving over and forward by his fronts crossing nicely.

His nose can face out a little when you’re asking for the hip to move in and his nose can face in when you ask his shoulder to move out, for instance, when starting these maneuvers, but as your horse gets better at them, ask him to remain straight while moving the shoulder or hip over. Ideally, we want to get to the point where his hind end and his nose go in the same direction while also moving forward, which mimics the lope departure or lead change, but we’ll get into that some other time.

Good luck with advancing your buttons! This is a great way to have a handle on all the parts of a horse, and by seaparating them first, you can put them back together in different ways than you may have thought possible. I use my legs a TON for direction and instruction, and my reins end up being for support, not complete control. It’s pretty fun when you start getting good at it and being a team with your horse!