It had been a nice wet spring and calving was on full blast. I needed to go get a cow in who was taking too long to calve, so I decided to kill two birds with one stone and ride the old kid horse. Kid horses need to have an adult ride them occasionally and I figured the old horse could handle the ride out into the small calving trap.

When I saddled Lobo up with my saddle instead of the tiny kid’s saddle, he must have wondered. It had been several years since a grownup had ridden him. He was 27 that spring. He was a little stiff but sound and in excellent condition due to the good feed we kept in front of him. I bridled him up in the spade he carried so well, but obviously didn’t get ridden in by a two year old. His eye sure brightened it seemed. He had reached out and put the bit in his own mouth as I bridled him.

I stepped on and the old boy was eager to go do something. I’d enjoyed riding him when he was a little younger and knew his capabilities, so I was eager too. We trotted out of the corrals and across the trap. His ears were up, he had his neck arched and he was just floating across the soft ground, which cushioned his joints. He was no doubt a beautiful specimen of bridle horse, even with a frosty face.

We got the cow sorted out and she didn’t give us too much trouble before she lined out. Lobo’s ears were pointed at her every step of the way to the corral, just hoping she’d try him. When I got her into the first corral and shut the gate, we proceeded to put the cow through another gate into the alley going to the barn. At this point, she staged a rebellion. She decided that there was no way we were going to get her through that gate and she meant to prove it.

Well, the mud was deep in that corral and it was a little slippery, but Lobo absolutely turned back his clock and went to work. He countered her every move, bellied down nose to nose, and turned her back on the fence like a pro. Oh man it was fun! He was so cowy and quick, and to feel him make those moves was a thrill in itself, but more so knowing his age.

Finally the cow just gave up, turned and trotted through the gate. When she did, Lobo slung his head, gave a squeal and a little hop, then pranced proudly after her, making the cricket sing in the bit. He’d never met a cow yet that he couldn’t put through a gate and he was pretty pleased with himself that he still could.

I was so tickled with him and for him. What a rush! He still had the skills and I’d gotten to enjoy them one more time! What a grand old horse he was. 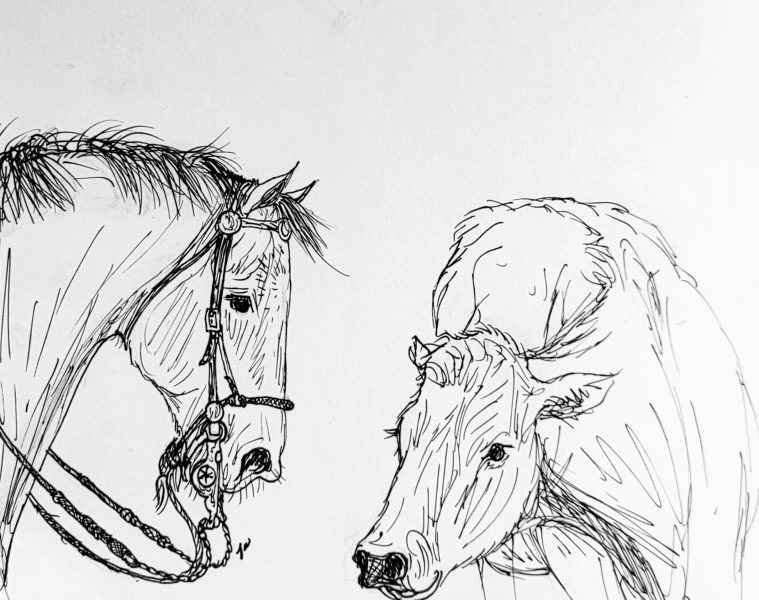