Back in the years of having a band of broodmares, we actually had few foaling difficulties. One spring though, a big mare that I had raised and ridden for several years just refused to have her foal. The foal’s feet and muzzle would be out and as soon as the pressure of the chest coming into the birth canal started, the mare would back up to the wall and push those legs back in. She was clever but had no tolerance for pain, obviously.

So, after much frustration with her, back and forth to the house to talk to my vet friend on the phone (pre-cell phone), and no small amount of cussing her for a pea hearted dink, I finally tied her to a post, gave her a vet recommended shot of oxytocin to bring on hard labor, threatened to make a rug out of her if she kicked me but didn’t kill me, and hand pulled the foal with her standing up. Of course, that wasn’t an easy deal. She was big and mad, he was a big baby, and I was tired and mad. So, in the process, the foal met me first and learned my voice during the birth, even blinking and looking right at me while we were nose to nose.

Upon his arrival, she was worn out from fighting the process, so I set in to get the foal dried off. She liked him fine and helped some, but she was tired. I didn’t have any sympathy for her but sure did for him. He was tired too from being in the birth canal for so long, so I milked out a bottle for him and fed him before he got up. She wasn’t too thrilled with the uterine cramps the milking brought on, but must have harkened back to the threats I had made toward her and didn’t try to kick me.

Once he got a pint of good milk in him, he was ready to get up and get on with living. She had cleaned by this time so the cramping was less and she readily let him nurse with me helping guide him to the spigots. He sure latched on and wasn’t any the worse for wear for his ordeal. She was absolutely delighted with him and mothered him very well.

The next morning it was sunny out, so I turned them out into a small pen on the south side of the barn. The colt, who I had named Toots by then, was figuring out his legs and trying to make laps in the pen. The mare went to the water tank and got a big drink and just then a horse in another pen stuck their head over a fence nearby, trying to see the foal. The mare, all 1300 plus pounds of her, whirled around to kick at the other horse, and I saw that she would kick through the gate and cause a terrible wreck if she did, so, I tossed a small plastic bucket I had in my hand at her to stop her. It worked, but the bucket hitting the ground and scared Toots.

He was in the middle of the pen and jumped and ran to get away from the bucket and ran right into the fence, bouncing off, hitting the ground, and springing up to get away again. That time he went over a wooden feed trough in the middle of the pen and landed on his back. Before he could get up again, I was on him, holding him and talking to him. As soon as he heard my voice, he went limp. His heart was pounding and he was breathing fast, eyes big, but he knew my voice and was instantly still. I helped him sit up a little with his feet under him, rubbing him and checking him for damage, and kept talking to him. His mother had come to nuzzle him as well. 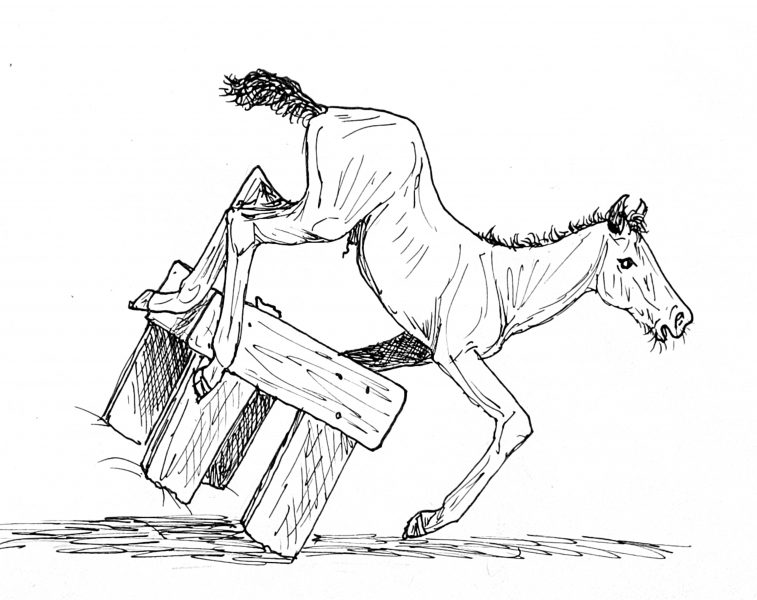 Once he had calmed down and his breathing and heart rate were normal, I let him get up, still keeping a hand on him. Miraculously, he didn’t have a scratch on him. He worked his mouth a little, processing the new information he had just taken in, then had to have a snack from his mother.

I know it was foolish of me to throw the bucket that scared him, but that big mare tearing the gate to smithereens would have probably been a bigger disaster, crippling her and probably him in the wreck. So, maybe I still made the best choice. What it showed me, though, was how strongly imprinted Toots was to trust my voice and to be calmed by my presence. He never changed his absolute trust in humans in his entire life and became a gentle, trustworthy saddle horse when he moved on to his next owner.