I spent a fall and winter working for an outfit that had absolutely the worst fences I’d ever seen. The perimeter fences were maintained by the neighbors in self defense, so at least all this ranch’s stock stayed on the ranch. But, the division fences were usually hanging a foot or so off the ground with broken wires and in some places, just laying on the ground. The stock, both sheep and cattle, had the run of the ranch and gathering them was a challenge since they could go about anywhere and a horse couldn’t. The stock had all gotten wild and wise due to failed attempts to gather them in the past.

The feller I was working for, we’ll call him Fred, thought we ought to take a stab at gathering the sheep and putting them all in one pasture for the winter. You may be thinking that the gather of the sheep on this place would be a ride out around them and mosey them over to the pasture they were going into. You would be wrong.

Picture gathering hundreds of head of antelope, some of which had never been gathered in their lives, in rough country, in bunches of 20 to 30 head, some bunches just one wily old ewe and her lambs. I’ll tell you, those old ewes were crafty and knew every place they could go that a horse couldn’t. They could run for miles too. Not your ordinary sheep.

Fred and I were in a pasture with a big, deep canyon-like draw running through it for about a half mile. It was absolutely uncrossable for anything without wings or wool. Fred had a psychotic catch dog that would jump off into this draw and was able to catch the sheep on the other side. The problem with the dog is that he would start eating the sheep as soon as he caught it, so one had to be pretty quick to get there. That was tough with that draw.

We had spent over a week trying to get the sheep out of this pasture. We were down to the ones that had to be roped, tied down, then dragged to as close to a trailer as we could get them, all without the catch dog eating them. Fred rode a little mule a lot of the time that was as tough as boiled owl. He was also downright treacherous and would bite, kick, strike and buck any time it suited him. The mule’s name was Johnny. He weighed in at under 800 pounds I’m sure. Fred weighed in at about 270 or more, and was rather top heavy, shall we say. Even with as mean as Johnny was, I felt no envy for his lot in life.

On the day in question, we had flushed an old black face cross ewe and her big, fat twin lambs out of a creek bottom and she was running like a cheetah for that deep draw. Neither one of us could get there in time to rope her but we were trying and Fred was in the lead. Alas, she shot between Fred and the canyon edge and off she went on an eyebrow of a trail that would have made a mountain goat nervous.

Johnny set the brakes and skidded to a halt, feet nearly sliding off over the edge. Fred watched the old ewe a moment, yanked Johnny back so he was facing the abyss, flung his ample weight forward, and completely overbalanced, Johnny tipped over the edge, mouth wide open, ears straight forward and his eyes bugged out a foot! 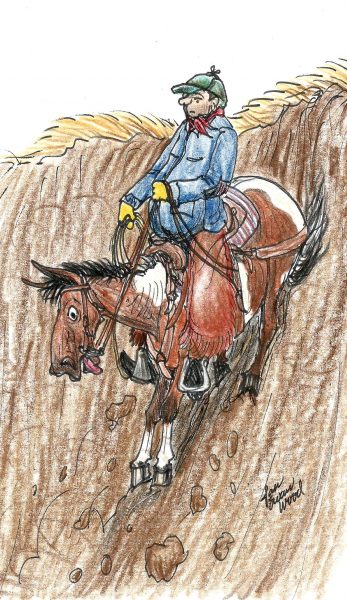 I slid my horse to a stop at the edge, expecting a heap of mule and man at the bottom, but Johnny was peddling as hard as he could, butt tucked clear under him, and in a shower of dirt and rocks, landed at the bottom on his feet. Fred never even let up on the throttle, but spanked Johnny up the other side, which was a bit less steep, and followed that old ewe up and got to her just as the catch dog caught her and somersaulted her into a pile. Fred stepped off Johnny and tied her down before the dog started dining on her. He roped the lambs and tied them down, then trotted Johnny to the head of that draw and rejoined me in our wild sheep gather. Just another day in the wild and wooly west, when a mule sprouted wings and the theory that God watches after fools was tested again.