My son turned 31 recently. Time has sure flown. It seems like yesterday he was a little boy. Now he has boys of his own.

I remember when his fourth birthday was coming up and I asked him what he wanted for his birthday. To preface this, his Dad and I, with him in tow on his own horse, had ridden on about 4000 yearling steers and 800 mother cows from late April until the the day in question. It was a rare occasion that my son wasn’t along, and if left behind, was absolutely broken hearted. If we weren’t making 20 or more mile circles on our horses, he and I were fencing and fixing water gaps. It was seven days a week, up at 3 a.m., maybe in by 10 p.m. I don’t know how many miles he put in horseback that summer, but I’d guess probably more than many adults have ridden in a lifetime.

So, back to the birthday conversation. We talked about different things he was interested in. Mind you, at four, you don’t have many birthdays under your belt, so it’s still kind of a mystery why, one day a year, you get presents. He had been wanting a goldfish, so that was already on the list. I knew my extended family would provide lots of toys. He was a rare little boy that didn’t have much interest in toys at that point, as he was never in the house to play with them.

I asked him if there was something he’d like to do for his birthday, something special that he didn’t get to do often. He thought about that for a long time while we were driving to the next spot of fence to fix. He puzzled on it, thinking hard. Finally, after several hours, he came up with his request.

He wanted to ride Sandy, the coin operated horse in front of a store we shopped at, as many times as he wanted, not the usual once. I asked him if he was sure and he said he was. That was his fondest desire.

So, at the first opportunity close to his birthday, I went to the bank and got $15 worth of quarters, put them in a container, and off we went to ride Sandy. He rode Sandy and rode Sandy and just smiled away. We visited while he rode, and he never stopped smiling. There weren’t many quarters left, maybe a few dollars’ worth, when he finally decided that he’d ridden Sandy enough.

We went on with our big day, visited the fish hatchery, ate pizza and ice cream, but the high point of the day was all that time on Sandy.

It’s always amazed me that that is what he wanted to do, as he put in six or seven days a week on a real horse, doing real cowboy work. But, it fulfilled his fondest wish at four years of age. Life was sure simpler then. I wish, once more, I could fulfill a fond wish of his for a little bucket of quarters. 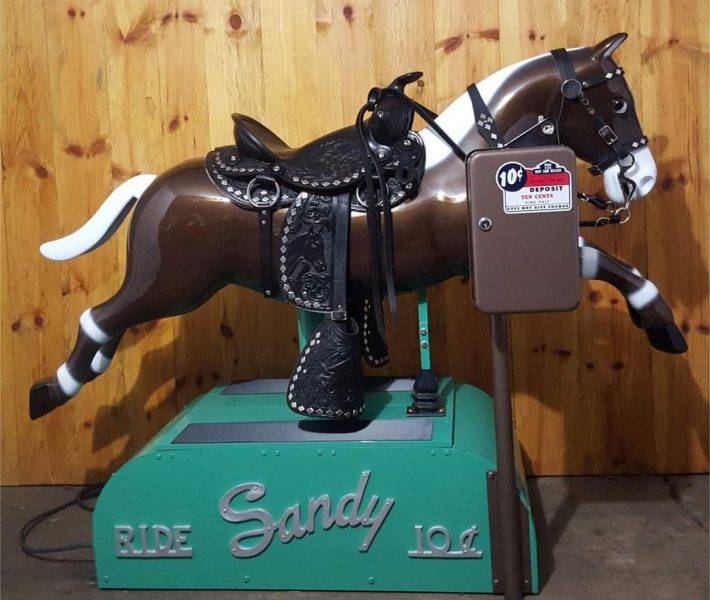