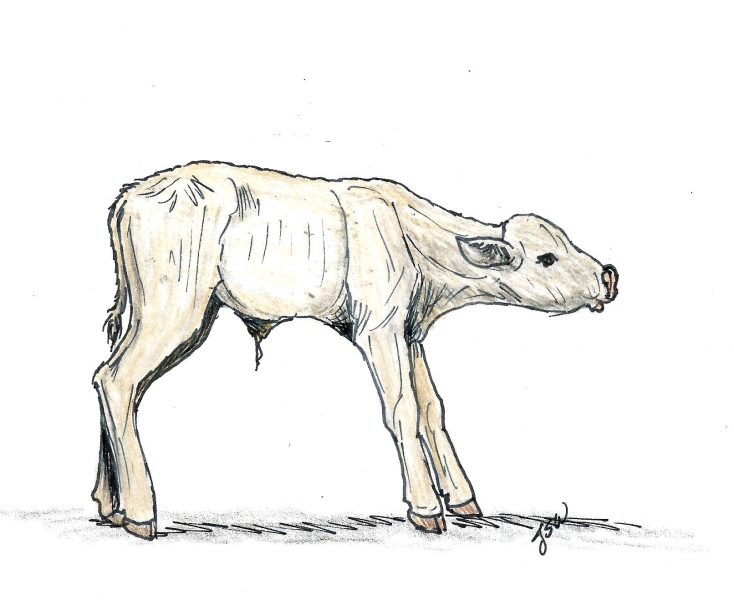 The calf was up and had nursed when I made the evening gather of the springers. He was a giant! He was a Charolais cross and looked to weight in the 120 pound range or more. His mama was one of those short, stout Angus cows that raise a big calf every year, one of those really good ones. She was tired from having him but had him polished to a shine and was taking good care of him. He was in a little swale out of the March wind and all was well. I left them there.

I rode out the next morning to gather the pairs up from the day before, tag them and get them moved to another pasture. I found the good Angus cow fussing by the creek. Her big bull calf was in the water and was deader than a politician’s promises. He had apparently toddled after her when she went to water and had fallen off the bank above the creek and into the icy water. The cow was sure trying to get him up but it was too late. I got a rope on him and drug him up onto the flat above the creek, feeling terrible that he was dead. He was pretty stiff and his eyes were open and the pupils fixed and dilated. It was heartbreaking.

His mama was such a good cow that putting another calf on her was the right thing to do. There were some cows in the bunch that had a good reason to be culled, so I knew just the calf that I would give her. His mama wouldn’t mother him and was in the barn, in a pen, so she could even keep track of him. Perfect candidate. The dead calf’s hide would make the graft a breeze.

I drove out with the pickup, loaded the huge calf in the back and led the cow in. She went right in the corral for me and I shut the gate. The calf was icy cold and was going to skin hard so I took it up to the house and dragged it in and left it on the rug in the kitchen to thaw out.

It was several hours before I got done with everything outside and finally had time to skin the dead calf. It’s a grisly job, but necessary if you need to graft. So, with that thought in mind, I headed in to do it.

When I went in the house I had trouble opening the door as there was a chair tipped over in the way. I squeezed through and what a sight met my eyes. He was up! Oh boy! The table was moved out into the middle of the floor as he’d gotten under it somehow and was so tall that he walked it around. The stuff off the end was all over the floor, and there were calf slobber smears on every surface he could reach. The chairs were all tipped, microwave cart was turned halfway around and there was a bit of poop on the floor. But, there, looking at me with his big soft eyes, was the giant of a calf, alive and hungry! Lazarus had come back to life!

I got him out the door and down to the barn with some difficulty and the reunion with his mama was wonderful. I put them in a pen in the barn with lots of straw for him to lay in. He nursed and then curled up in the straw, his good mama licking him and so glad to have him back. I was sure glad to have them there too. No more cold creek for him. I made sure Lazarus didn’t have to rise from the dead a second time!