A Bronc, A Smart Horse, And Cholla

Years ago when I was working on a ranch in New Mexico, I had an experience that I wouldn’t have believed if I hadn’t seen it for myself. When I went to work on the outfit, I was told I could have one personal horse. I had a string of horses assigned to me when I signed on, so I wasn’t really in need of my personal horse, but I had a big gelding that I knew I had better keep riding or he’d get to where I couldn’t.

I called this horse Luke and he was a four year old and stood well over 16 hands. He was a well bred horse and good looking but had had a bad start before I got him and was a dirty, treacherous son of a gun.

He could really buck, but worse than that, he was a dangerous on the ground. He’d strike you without much provocation and could kick a person no matter where you were standing if within six feet. I only curried him where I needed to put the saddle and had “stolen” rides on him for about four months when I headed south.

His arrival on the ranch was heralded by virtually every horse in the 85 head cavvy having to take a run at him. His upholstery got a little marred, but he was quick and fast and figured out how to stay alive. I didn’t feel very sorry for his friendless state and thought he might decide he liked me if he didn’t have any horse friends.

About a month after he arrived, he came in with the cavvy one morning with a short branch of cholla stuck to his neck a few inches back from his throatlatch. Cholla (choy-a) for those who don’t know, is a wicked kind of cactus that gets big and tall and has branches that are simply covered with stickers. Those stickers have hooks on the tips to catch in anything that passes, including arms and shotgun chaps, and will really dig into something like a horse’s neck. Once they’ve festered there for a while, they’ll drop off and a new cholla is planted where it lands.

Pulling a cholla off of something is very painful and I knew that Luke might very well pat me between the running lights when I did it. I was planning on leaving him in the corral for the day and that evening I would try to con a couple of the other cowboys into helping me get him into an alley or behind a gate so that I, and anyone helping me, might live through pulling that cholla off of him. It was not a very promising scenario to contemplate.

I finished saddling my horse for the day and got a halter to go catch Luke so I could put him in another pen so the cavvy could be turned out. When I finally spotted him in the milling bunch of horses, he was standing in a corner of the big corral with Matador, a bright young gelding, standing with him. As I worked my way through the horses, I saw that Matador was doing something while he was standing there, but it wasn’t until I got closer that I saw what it was.

As Luke stood stock still, Matador was carefully working at that nasty cholla with his upper lip. I watched as he kept working at it, sure he was going to get it in his lip any moment. Slowly he worked it loose until it finally dropped to the ground. Luke shook his head and neck and Matador calmly walked away. 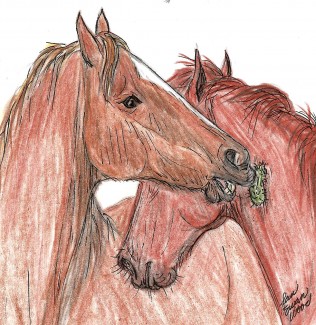 Several things about the incident surprised me. First of all, Matador and Luke weren’t buddies, though they’d ridden some miles in a trailer together. Second, and most amazing, how did Matador know about the cholla and how did he know how to get it out? Why did he even care? I could have seen him working one off of one of his own legs or something, but off of the neck of another horse?

Matador was a very sharp horse, clever even, but I’d never seen anything like that, nor have I since. I’ve heard it said that the Lord works in mysterious ways, and indeed He does. Right down to using one horse to help another.