A Bay Horse by the Numbers 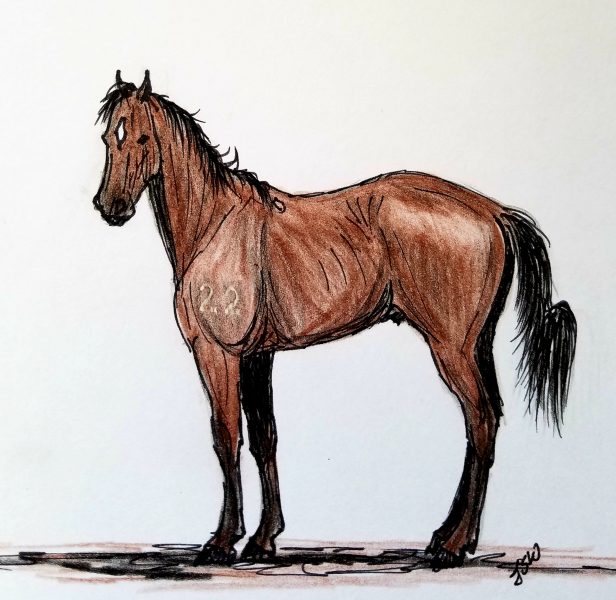 I was getting some groceries the other day and ran into an old friend of many years. Back when I was about 18 I was working for an outfit that ran yearlings all over the country. I was taking care of a big jag of both steers and feeder heifers and this man was my cowboss. His name is Jim.

I was independent of the headquarters and only saw anyone else from there when there was a problem or cattle to be shipped. So, my friend Jim and another guy or two weren’t around very often. I’d been hired to do the job and they trusted me to get it done. Jim and his crew had plenty to do elsewhere.

The first time Jim was there, we were receiving the steers and trailing them to the back part of this big summer lease. He and another guy or two were there besides me. Jim was riding a keen looking bay gelding. This horse was nicely made, about 15 hands, and could sure cover the country. He was a company horse I think and had a big 22 brand on his shoulder. That first day, I heard Jim call his horse “Five”. Funny name for a horse, but, better than Brownie or Bay, I thought. Jim was pretty careful around this horse as he was a watchy booger and plenty snorty, but Jim was a good hand and never had any real trouble with him that I saw.

In late June, I had a round of viral pinkeye go through, so Jim and another guy came and helped me get through a big string of bad eyed heifers. We’d rope them, give them a shot, some stuff in the eye and glued on a patch. It was sure easier with their help as I’d been doing a bunch on my own and getting behind. That day Jim called this same bay horse Nine or Eleven or something. I didn’t question it.

In July we gathered a bunch of the heifers to put through the chute to give them another implant and Jim and crew were out to help again. This time that bay horse was called Thirteen or Fourteen. I was sure puzzled that this sharp, clear minded guy had so much trouble remembering the name of his horse, but I didn’t say anything.

Finally, late summer, the big end of the steers were ready to be gathered and shipped to a feedlot somewhere. Jim and crew were out and Jim was, as usual, riding the bay. I don’t think that horse got much time off as he was as fit as a racehorse and tough as rawhide. On this day, the horse boogered away from Jim or something and Jim scolded him and called him yet another number name, maybe Sixteen.

I couldn’t stand it any more. I had to ask him about the horse’s name. He pointed toward the 22 on the horse’s shoulder and said “When this sonofa***** has bucked me off 22 times, I’m going to can him!”

Well, that explained how the horse had a different name every time. I never saw him buck Jim off, but he must have done it a’plenty! I think I’d have quit him long before 22!