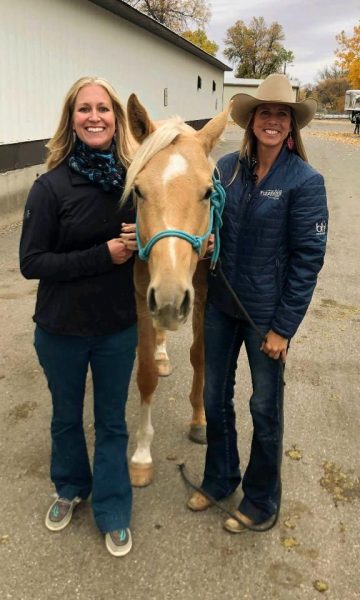 Chewy, who has won about $100,000 in her four-year-old futurity year, is flanked by her owner, Katie Lindahl, on the left, and her rider, Molly Otto, on the right.

Teasin Dat Guy, “Chewy”,  is a four-year-old palomino by Frenchmans Guy and out of a daughter of Blazin Jetolena.  She is owned by Katie Lindahl and ridden by Molly Otto.

Molly got her as a three-year-old and started her on the barrels in July of 2019. Chewy progressed well, and in November of 2019, Molly and Katie decided that her futurity year would be as a four-year-old.

“We didn’t have plans to futurity this mare as a four-year-old,” Molly explained. “I felt like she was very mature. (Barrel racing) was easy for her and she seemed to enjoy it. It didn’t make sense to hold her back. I felt that if we continued to go slow with her, she would be bored.”

It was a good move. In 2020, Chewy has won a tad under $100,000 so far, including all three rounds at the Five States Breeders’ Futurity, the Tri-State Futurity in Winona, Minn., and the Gridiron Futurity in Huron, S.D. 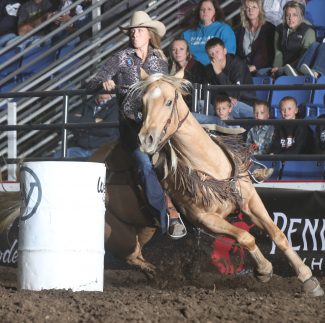 Molly rode her in the third round of the Badlands Circuit Finals Rodeo in Minot, securing a third-place finish in the average with Chewy.  Her futurity year is not done yet.  Chewy will still go to a few more futurities this year.

The horse, who got her name because she chewed on other horses’ tails when she was young, is “one of the most reliable horses I’ve ever had,” Molly said, “especially as a four-year-old.”

Chewy loves to work. “She’s always one of the first horses that wants to be caught. She follows me around.” She’s also mature for her age. “She acts like a season pro. She’s really quiet, laid back, and pretty much knows when it’s time to go.

“I’ve never had a horse that, in any type of situation or (arena) set-up, and I know she can go out and do her job, every single time. That’s how she’s been all year. It’s been really fun.”